Walking around the quiet street at the base of Sugarloaf, you can tell you are approaching Bar Urca not by the smells, but by the people. The entire concrete waterfront wall is covered with easygoing Cariocas enjoying greasy snacks and cold beer. These are Bar Urca’s stock in trade, as is its view, overlooking Urca beach on Guanabara bay. There are no tables here: Bar Urca itself is only a walkup counter in a corner building, though there is a bigger restaurant that serves a variety of seafood dishes. 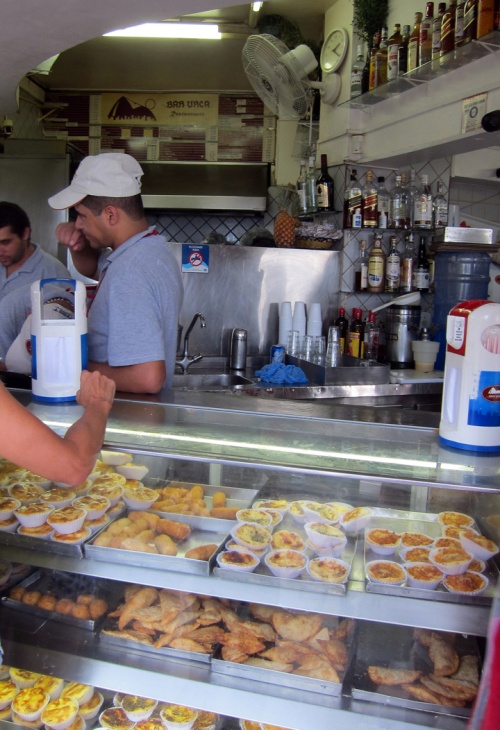 The assortment of salgadinhos (salty snacks) offered was wide: and included mainly cheese and seafood options. The options are listed on a tiny bulletin board on the back of the bar, not in the case itself. Good luck being able to read, or even see, the menu. Instead, ask the staff: we asked around, and the shrimp and crab dishes came especially highly reccomended. We ordered 3 salgadinhos for about 15 Reais apiece: the Shrimp Empada, the Pastel de Queijo (cheese) and the Pastel de Siri (Crab). The two pasteis were like little tarts, and the empada was a folded pocket of fried dough – a Brazilian empanada. 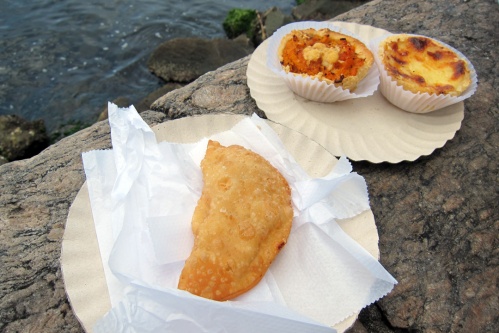 Bar Urca Salgadinhos by the water

The empada was the standout, and it was perfectly hot and flaky. Despite being in a pastry crust, the shrimp seemed fresh. The queijo pastel was a little more forgettable, but the Siri was also delicious, and had a hint of palm oil which gave it a Bahian flavor. We sat on the rock wall and enjoyed our treats as we anticipated the sunset. Though the salgadinhos are good, the best part about Bar Urca is its view, so make sure you are there on a clear day.

One response to “Brazil: Classic Salgadinhos at Bar Urca”