We were jonesing for some BBQ while heading out of Champaign, IL. We didn’t want to have a sit-down meal at Urbana’s well-known Black Dog BBQ (which we have visited previously, and highly enjoyed); but we also weren’t willing to wait until we got back to Chicago (2.5 hours later) to eat at Smoque. In downtown Champaign, we drove past a trailer in the parking lot of the Tumble Inn bar with a hand-painted sign that said “Chester’s BBQ.” We figured we had to try it. 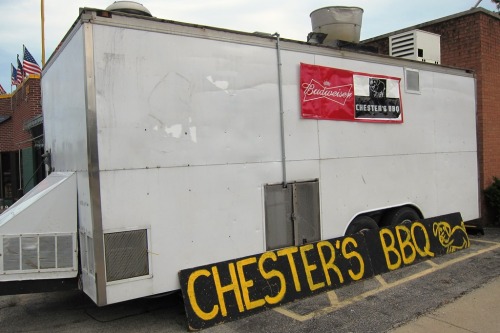 We were disappointed at first, the trailer appeared to be open but empty, and me, with my official BBQ shirt on, had to wait around until the owner returned to the truck in 15 minutes. We used the time to settle on a menu selection: an order of the “Award-Winning Pulled Pork” and a side of what was called “Broccoli Slaw.” (total of $8 – a free side was included). The slaw was a mix of broccoli florettes, bacon, feta, cranberries, tossed in honey vinaigrette dressing. It definitely was an unorthodox side, but if you’d prefer there is also some classic slaw and potato salad. 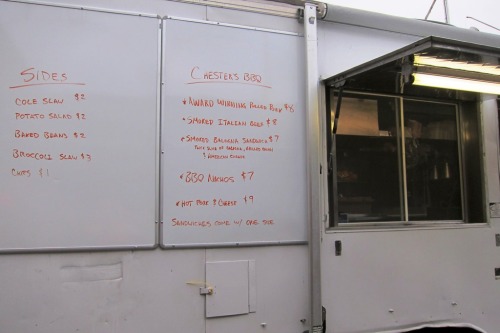 The Menu at Chester’s

When the owner returned – we quickly ordered two pulled-pork sammies. The pulled pork was excellent. The smoke flavor was well-cultivated, and the meat stood very well on its own without any of the sauce (which you add yourself). We devoured it – flavorful, smoky, and addictive, on a bun that was so unnecessary we just used it to dip in the sauce. They change their sauce every week, and there are three levels of heat (mild, medium and hot). We went with the hot sauce, which had a little kick, but not too much; this week a fruity North Carolina style sauce with tomato and vinegar. 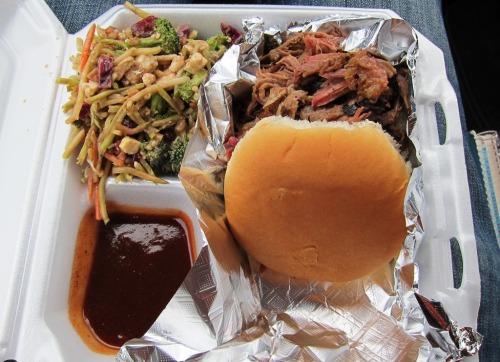 Chester’s is a competition BBQ truck, and for now is only parked at the Tumble Inn after 5 PM on Fridays and Saturdays, but it’s definitely worth the wait. Chester’s was just as good, if not better, than Black Dog – we hope they can expand their operation in Chambana, because the area could always use another great BBQ option. Chester’s is a great hidden spot we hope won’t stay hidden for long.