ETW was thrilled this year to receive a complimentary press pass to Chicago Gourmet, a 2-day festival and showcase of the best food and wine the city has to offer. The star-studded event offers an opportunity to catch a glimpse of the latest trends in the Chicago food scene; and in 2014, five years after my last visit, I remained very excited to see the changes (as well as, of course, the old classics). General admission tickets for a single day are a steep – $170 for a day or $275 for the weekend – but offset by the knowledge that tickets include all the food and wine you can drink/stuff yourself with. You can buy a ticket for Saturday or Sunday (or both) and these sold out in advance of the event. I recently heard the event compared by Gapers Block to the Lollapalooza of food, and that may not be too inaccurate. Set inside the Pritzker Pavilion lawn in Millennium Park, in downtown Chicago, and gated off, the price and security reinforce what an exclusive event this is. On entry, you get a reusable tote, and everyone gets a wine glass and a plastic plate with a little wine holder to take to all the various booths. Camera in tow and plate in hand, I headed into the fray to see the best and brightest of Chicago’s culinary landscape.

Exhibitor and chef pavilions ring the central lawn, in addition to a further aisle of pavilions in the center of the field. Buckets of water bottles, tables and chairs were dotted throughout the lawn. Though people trickled in slowly at first, soon there was a mad rush of people pouring in, with lines forming quickly at most booths.

Avoiding the mad booth rush, I started off at the Pritzker Pavilion, where the day’s first cooking demo featured Carlos Gaytan and Rick Bayless cooking some of their Mexican favorites and chatting amiably with the crowd. Nearby, on the east side of the park, there were further hands-on seminars (such as Bordeaux wines and another on fried chicken). Another popular demo centered on chef Carla Hall’s favorite comfort food.

Demos aside, the bulk of Chicago Gourmet’s food offerings are available at ten different themed dining pavilions.There were two rounds at each pavilion, 12:30 to 3 and 3-5:30, each with a wholly new set of restaurants/chefs. Each pavilion had 3 or 4 tables inside and theme park-style switchbacks to direct the line, even though these frequently spilled over. There were some pavilions with obvious themes, including dessert or BBQ, while others had a broader flavor like the Mariano’s or Green City Market pavilions. 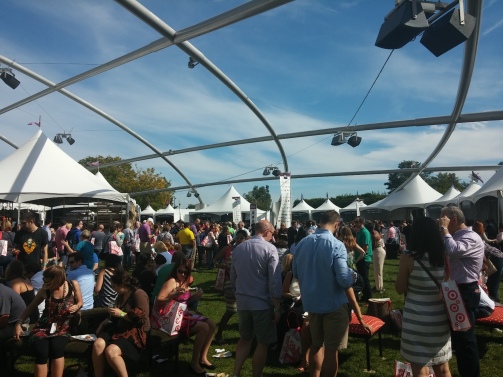 Before the pavilions even opened, some already had lines, and at peak time some lines were 30+ minutes long. Once you reached the front you received a tasting portion from each chef, often in a biodegradable coconut husk plate. You also had the opportunity to chat with the chef, but not too much, lest you irritate the people in line behind you. Trying every single dish would be near impossible, and some of the portions are not super tiny so I had to make the effort to prioritize. It’s a little overwhelming!

Dessert (I went both rounds) was one of my favorite pavilions. I really have a sweet tooth, and I found the dishes to be particularly creative. The pavilions represented a broad and diverse range of restaurants, with a similarly wide range of foods: from tiny cups of soup, to mini sandwiches to petit fours. It would be impossible to cover every dish I sampled, but I will mention a few highlights, desserts and not: 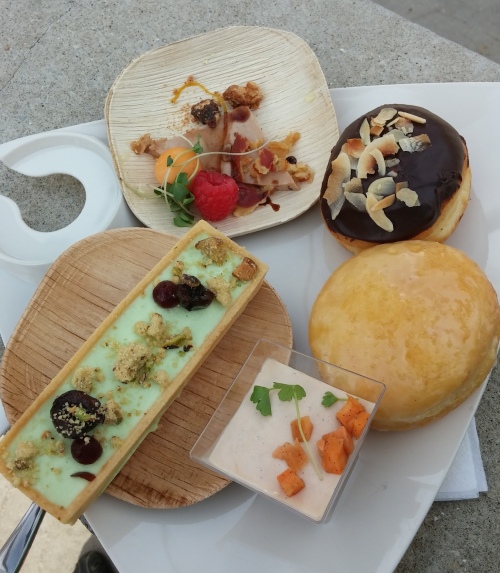 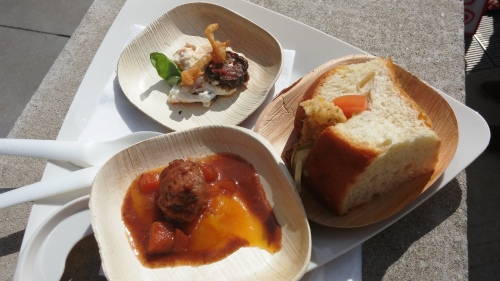 Some surprising aspects of the festival were both the amount of non-food offerings (maybe we need to learn to enjoy wine a bit more?), as well as larger well-known companies including Vosges, Barilla, and somewhat peculiarly (sorry) Chipotle offering tastings. The balsamic truffles and bacon chocolate from Vosges were a particular highlight from this group. Other food purveyors outside of the pavilion areas included Gaylord Indian cuisines, who provided some tasty chicken tikka masala, Texas de Brazil with signature churrasco and Chicago Q, which presented a tasty brisket slider (and a pretty impressive sauce and smoker setup).

Various vineyards and liquor distilleries were also featured, and sampling was highly encouraged (some people definitely over-imbibed). I tried to stick to some of the more unique options, and highlights included a pink champagne cocktail from Chandon, and pisco sour from Kappa. Those whiskey lovers among us would have appreciated the Glenmorangie booth. I would be quite curious to see what a wine lover would pick from the Chicago Gourmet lineup (or how they would even begin to navigate the huge number of booths). 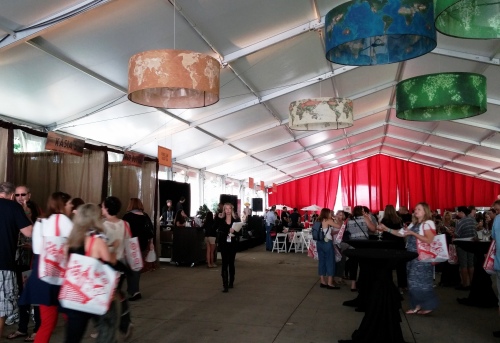 One of the ETW favorites was, perhaps unsurprisingly, the global pavilion. Restaurants serving food from Chicago’s sister cities were featured, which I think was particularly clever. The lineup was slightly different on each day, and also included food importers, a book signing area and a small market of foods, drinks and spices produced by local artisans. 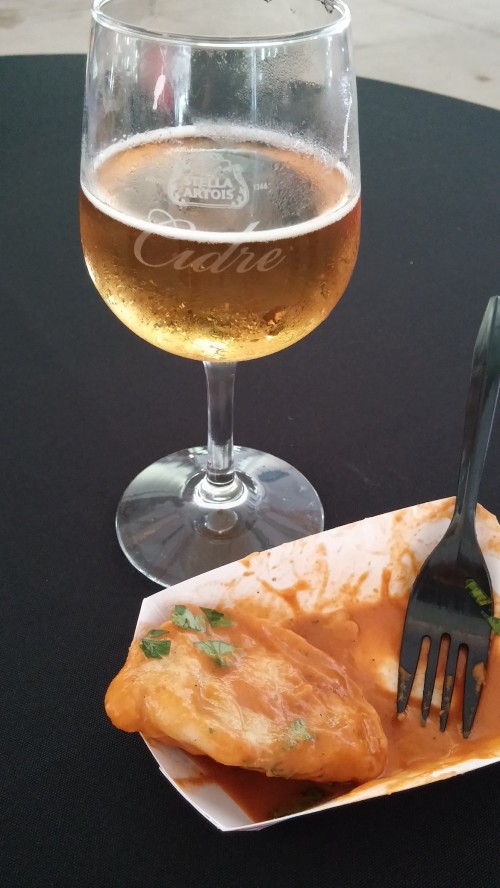 Belgian brewers Leffe and Stella Artois provided some international beverages for the tent. It even seemed to be a badge of honor to get the official Stella glassware that came along with a cider or beer tasting. Even right when the door opened there was a huge line for Stella. I did not even attempt to enter the Stella beer line, though I did sample the cider (above -which was quite good, even from a non-beer drinker’s perspective).

At 2 pm I made my way over to the Grand Cru event on top of Harris Theater, which was a separate $199 ticket on top of daily admission. The setup was similar to Chicago Gourmet, but compressed. The entire event was located in a tent with chef tables in the back, with aisles of wine and spirits hand-selected by Master Sommeliers. Due to the confined space, I fount this tent to be extremely claustrophobic, and some elbows were definitely being thrown to get to the wine samples!

Making my way through the wine gauntlet, I headed for the chef tables in the back. Girl & the Goat chef Stephanie Izard was serving goat empanadas with heirloom tomatoes, and was the biggest crowd draw of the event. She entertained everyone’s questions gracefully, which may have contributed to the length of the line. But she is so nice, who can object? That’s not to forget the other star chefs in attendance at Grand Cru: Jamie Bisonette (Coppa, Boston), Jimmy Banos Jr. (Purple Pig), Andrew Zimmerman (Sepia), Bruce Sherman (North Pond) Justin Aprahamian (Sanford, Milwaukee), Tony Mantuano and Chris Marchino (Spiaggia). Zimmerman’s eggplant tortoloni with cashew and sesame in broth was my favorite bite of Grand Cru tables.

As another point of difference, the water in Grand Cru was upped from Ice Mountain to Acqua Panna (for some reason this struck me as funny- it’s water!) and the vintners were even pricier than at the main event. Grand Cru also hosted several Master Sommeliers, including Alpana Singh, to teach classes. While I enjoyed my trip into the refined Grand Cru, there wasn’t much seating to be had on the roof, so I sauntered back to the main event instead of lingering for long.

By 4:30 the crowd was beginning to thin out, and I decided to get a mini Illy cappuccino to get a final shot of caffeine. As the day was wrapping up, some of the pavilions were giving away their food, instead of throwing it away. So if you can really hold off while the lines are long chances are you may get to sample all the food anyway. I had a great time and really stuffed myself at Chicago Gourmet. It was a great chance to sample some foods and restaurants I had never tried before, and gave me a few recipe ideas. It is definitely a must for every Chicago food lover at least once.

One response to “Chicago Gourmet 2014 Recap”