We have long noted the huge number of taquerias on the stretch of North Clark Street in Rogers Park, so it was particularly fortuitous that we came across an organized North Clark taco crawl put on by the Rogers Park Business Alliance. Between 4pm and 7pm, you could sample the offerings from any of ten different restaurants. For only $12, each participant got a punch card with the addresses and names of the participating taquerias, and at each visit you got your card signed, and got a taco in return. The taco was predetermined by the business. While the event ran three hours, due to work, we arrived at 5:30, now faced with the near-impossible task of downing ten tacos, as well as a few horchatas, in only ninety minutes. But we were determined to hit every spot on the list – gotta catch em all! We tackled the crawl with our friends R and R who are similarly interested in exploring sometimes-overwhelming North Clark Taco scene.

1. Fonda Dona Chio (6906 N. Clark) This was the start of the crawl for us, and where we received our punch-card. Their offering was a shredded chicken taco. This was a really good taco (L’s favorite of the whole crawl) with lots of flavor and a little kick. An excellent start to the crawl. Perhaps we lingered a little too long here chatting (and ate too quickly to get a picture), there were 9 more tacos on the horizon! 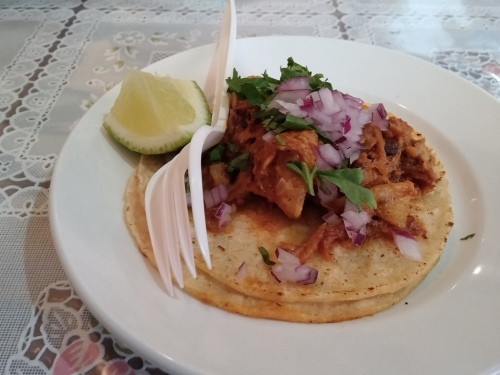 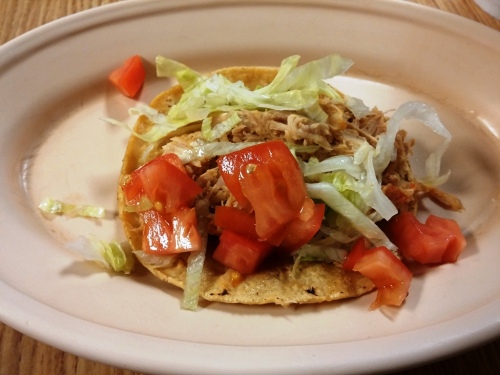 3. Taqueria el Charro (6661 N. Clark) Our friends R and R had previously visted this joint and gave it their stamp of approval. The taco on offer was shredded chicken with an American touch of lettuce and tomatoes. the restaurant also presented a nice variety of salsas and pickled veggies! A little on the mild side, but we needed a break after the Cochinita Pibil singed our taste buds.

4. El Pulpo Loco (6619 N. Clark) This is a relatively new restaurant on the scene, with shockingly blue walls. The taco here was shrimp- a joint favorite among L and M and their dining buddies. Shrimp is a little bit of a risky choice but they executed it flawlessly, with a delicious mango salsa to boot. 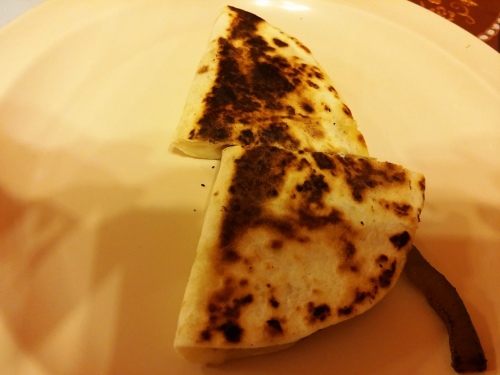 5. Chiki’s Pizza (6621 N. Clark) Not too sure of our first impressions of a taqueria flaunting their pizza above all else. Here, we received our only quesadilla of the night, cheese, onion and pepper. Good, but not actually a taco! Next.

6 La Cazuela – (6922 N. Clark) This place had an extremely eloborate interior, and the telenovela du jour “La Gata” was blaring in the background. The taco was fish, which is tough to do well, and this one fell a little short. It was a little too “fishy” and dry to be palatable.

7. Taqueria Hernandez (6983 N. Clark) These were the first tacos we got to-go, as our time was running short and our bellies were about to burst. The tacos were a simple, tasty chorizo. They also gave us mini churros, which was an awesome touch. Nice folks!

8. Uptown Taqueria (7023 N. Clark) The taco here was al pastor with traditional onion and cilantro topping. Not bad, with a good al pastor flavor, but nothing special. This was our 8th taco and by this time we were getting pretty full! We ain’t no Adam Richman.

9. El Famous Burrito (7047 N. Clark) A barebones, but efficient place, but the taco was pretty tasty. It was a tender shredded pork with onion (and maybe a little tripe?). We arrived there at 6:55, just under the gun.

10. Taqueria Chapala (7115 N. Clark) Our final stop! This taqueria is actually located in the back of a supermarket and is more of a meat/deli counter than anything with no seats. There was some kind of crazy bottleneck here and we arrived right at 7 and waited 25 minutes minutes for a taco…. The taco was plain beef with lettuce and melted cheese and no real seasoning. Not our favorite, but we have to give them props for staying in it until the bitter end!

So here are our top 3 from the crawl:

Overall, the taco crawl was a ton of fun, though I wish we had gotten there a little earlier in order to pace ourselves a bit more. Even so, we got to try a ton of new places we had been meaning to visit, all at once. Be warned though – this sort of feat is not for the weak of stomach!

2 responses to “Eating through the Rogers Park Taco Crawl”