A Visit to Ottolenghi in London

Yotam Ottolenghi’s 2010 vegetable-forward cookbook “Plenty” was one of the most talked about releases in past few years, making vegetarian cuisine beautiful and exciting. Now, with the release of the follow-up cookbook, “Plenty More,” Ottolenghi is again on everyone’s lips. However, before the cookbooks, there were the restaurants. Ottolenghi has a restaurant and three delis scattered around London. The delis particularly intigued me because they offer his signature food for carry-out by the kilo. Having gorged on sweets and fried food in London thus far, it was time to order a bit healthier.

I visited the Ottolenghi branch in the impossibly posh neighborhood of Belgravia (13 Motcomb Street London SW1X 8LB). The Ottolenghi store was bright and airy, and much like his cookbooks, everything was presented perfectly. The windows were full of deliciously fresh treats, and upon entry, the food was piled enticingly on large trays. I was frankly surprised at how beautiful everything looked. We are not talking about a Whole Food buffet, this stuff is art. 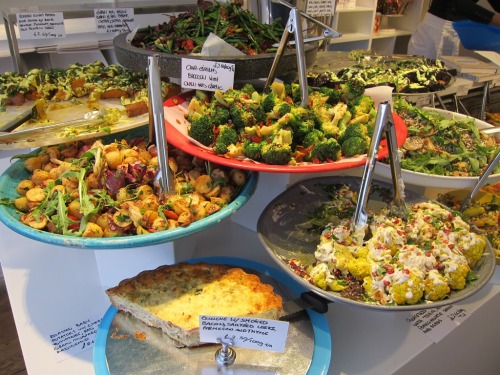 One downside, the ordering system was a bit confusing. Some items, like muffins or desserts are sold individually, while the vegetables were by weight, however it is important to note that you do NOT do this yourself, you have to request a paper takeout box (large or small) from the person behind the counter who will then put the food in the box for you. 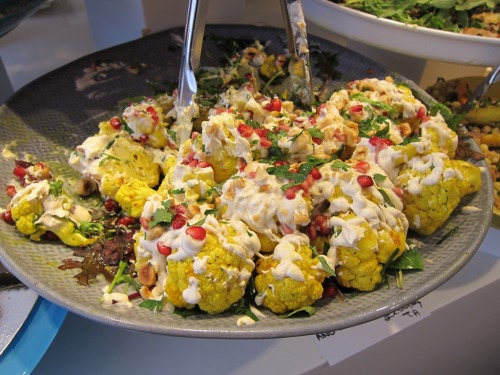 The desserts looked particularly tasty, including fruit tarts and a sunken chocolate cake. However, I was trying to be especially healthy so I skipped dessert altogether and went with a few of the veggie salads. The first dish that caught my eye was the curry roasted cauliflower with tahini, hazelnuts and pomegranate arils. The second salad I chose consisted of roasted sweet potatoes with Ras-al-hanout yogurt and pumpkin seeds. Other options included a new potato salad, a quiche with leeks and bacon and char-grilled broccoli and chilli. Now, I couldn’t totally avoid the “treats,” so I also picked a savory muffin with pesto, goat cheese and tomatoes.

Around the Belgravia shop there are no public parks, so I took my carryout box to the V&A museum to eat in the center courtyard. Everything was light, delicious and unique. The sweet potatoes with yogurt sauce was impossibly complex, and the pomegranate and cilantro really worked as a topping. However, the savory cheese-filled muffin was the most delicious of all! Ottolenghi is a great option for lunch, and gives me some further inspiration to try the cookbooks to bring the dishes to this side of the Atlantic.

One response to “A Visit to Ottolenghi in London”