One of the annual highlights of the Chicago food season is Chicago Gourmet! ETW is lucky to have gone for the last 3 years, and we always look forward to this veritable Disneyland of food. You pay a flat fee to enter and then the food and booze are free-flowing throughout the day in the enclosed event space in the Pritzker Pavilion in Millennium Park. The theme of this year’s Chicago Gourmet was “Food is Art,” and there were sculptures throughout, including a giant waffle, which seemed to be a fan favorite (by sculptor Christopher Newman).

Otherwise, the setup in 2016 was similar to that of years past: the wine distributors are in two rows the middle flanked by themed tasting booths, restaurants, and other exhibitors on the perimeter of the park. Each of the themed booths had two sessions, with 3 or 4 different restaurants appearing in each 2-hour block. One of the tips we learned from last year’s Chicago Gourmet was that you can’t possibly hit everything – or even most things- especially when it comes to the booze! We focused on going for international foods this year, as in years past, as well as seafood, which always seems to be a safe bet.

The main place for international flair at this year’s Chicago Gourmet was the Chicago sister cities tent, featuring Chicago restaurants with cuisine from one of Chicago’s 28 sister cities. First up (above) was Kamehachi (representing Osaka) with tuna tataki tartare on a crispy sticky rice cake; Avli Estiatorio (Athens) with pork tenderloin over apple skordalia with a walnut dressing; an Indian/Latin spiced rib from Vermilion (Delhi); and an unexpectedly sweet egg bao from Imperial Lamian (Shenyang, China). In the second round (below) we were treated to a Nori and shrimp ebi poke from Arami (Osaka); charbroiled octopus on pesto from Filini (Milan); corned beef from the Canadian-themed Northern Lights Poutine (Toronto); and a refreshing mango and shrimp salad from Cochon Volant (Paris).

One of the standalone booths with an international flavor was the Peruvian favorite Tanta, which offered burrata quinoa caprese-style salad and dulce de leche-filled alfajores. One of the other standout bites came from the American Express booth: butter and prosciutto toast topped with crispy radish from rising star Monteverde, with chef Sarah Grueneberg herself at the helm (below). We also sampled some of the Korean condiment Gochujang, and we have a hunch it will be the next Sriracha sauce. Some “big name” brands were there, too, including the Shop House Southeast Asian concept from Chipotle, Barilla, and Thermador kitchen appliances – which had a rotating dessert menu (including a giant platter of Stan’s Donuts) which turned over every hour or so!

One of the most consistent (and crowded booths) was the seafood tent, so we made a beeline for there after each turnover. Some of our favorite dishes from the first round were found at the seafood station, Hugo’s Frog Bar’s pineapple and seafood gazpacho and Ēma’s elegant tuna crudo.  In the second round we had our favorite dish of the entire event, a tiny lobster roll from Smack Shack that was absolutely full of prime lobster, in a tasty dressing with fresh tarragon, on a toasted bun (below). We could have gone back for two or three more. 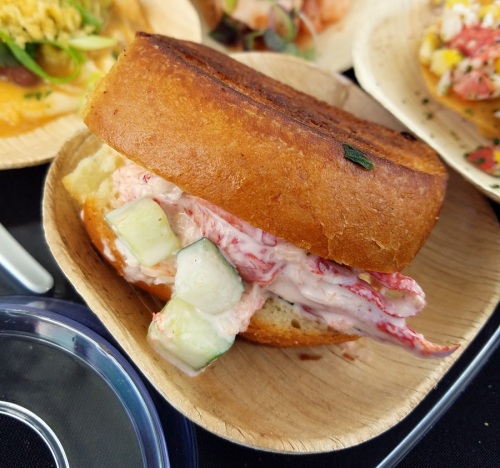 Creativity was also key at some of the booths. We loved Cafe des Architectes’ “burger” macarons – which were styled to look like sliders, complete with “bread” shells, and a chocolate filling. On the unique display front, Promontory had a little brick sterno grill with octopus and veggie kebabs in the Mariano’s tent. This location provided some of our other favorite bites, Dusek’s corn cream soup with chili oil; Nellcôte’s fig and blue cheese; and broccoli with nigella seeds from Ada St. On the BBQ front, there were assorted BBQ bites at the Big Green Egg tent, or at the more secluded second tent, which used to house the Sister Cities. One of the solid bites from this area was the ever-reliable brisket from Smoque.

Overall, there were a lot of tasty desserts at Chicago Gourmet, maybe more than in previous years. Mariano’s had an entire gelato booth where you could get a scoop of their classics, like chocolate, stracciatella, pistachio, and even the more unusual Speculoos. There was also an Gelato World Tour voting tent (above) where competitors (including Gelato D’Oro, Volare, BomboBar and Coda di Volpe) vied for the top spot with their more unusual gelato flavors. Our favorites were the chocolate cardamom, “Breakfast at Nonna’s House” (red currant, fior di latte and granola) and pink peppercorn. The Macau tourism tent also has an interesting dessert offering from Fat Rice: a sweet/savory, nori rice krispie with pork floss, sesame seeds and caramel fish sauce.

The Mexico tent was unusual in that it offered bites from both Mexican restaurants in Chicago, and some that are actually located in Mexico. The first round had a savory brisket taco from El Solazo; creatively-presented taquito shrimp and black bean cones from Lula Bistro in Mexico; and splashy yellow and green tequila macarons from La Postreria in Guadalajara. Round two (below) were chicken taco with crema and and chapulines (grasshoppers) from Mezcalina, white chocolate “Angel” mole from New Rebozo and a beef, mango and cotija tostada from Bar Takito.

We are not wine experts, so frankly we feel that we are always a little behind when it comes to the wine potion of the fest. We hit up the Campari booth for a refreshing Aperol Spritz, and tried a number of wines from around the world. There were also a few unique nonalcoholic drinks including a turmeric chai from Rishi tea and the new-to-us Lemoncocco drink, based on lemon and coconut spritzers found at the Lemoncocco kiosk in Rome. We also got the requisite Stella Artois beer glasses, and attempted to savor some Glenmorangie and Glenlivet. Another drink hit was Punch House’s berry punch with basil, located in one of the main tents. 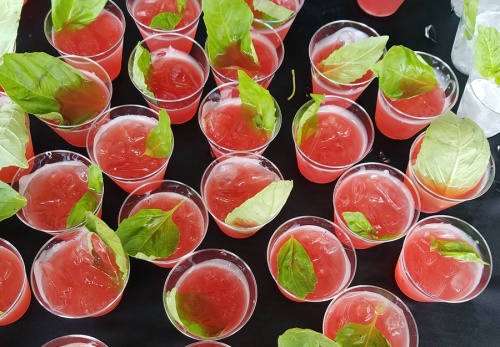 This year’s Chicago Gourmet was a real success, and left us satiated with flavors from near and far. As always, we capped off our day with one final mini-cappuccino from Illy. Chicago Gourmet also signals the unofficial end of the summer – and we think we sent it off in style. We look forward to seeing you at Chicago Gourmet next year!

One response to “ETW at Chicago Gourmet 2016 Recap”