A Taste of Cuba in the Chicago Loop at Cafecito

Upon entering Cafecito we had our first sign that it was a hidden gem – directly ahead of us in line was a pack of Chicago Police officers. If there are 8+ police officers in a place at 5 PM on a Saturday, we figure the food has to at least be decent. Cafecito’s laid-back and colorful ambiance welcomed us in right away, and other than the cops, the place was populated by international teens and 20-somethings checking their e-mail – not surprising since Cafecito is connected to a hostel! 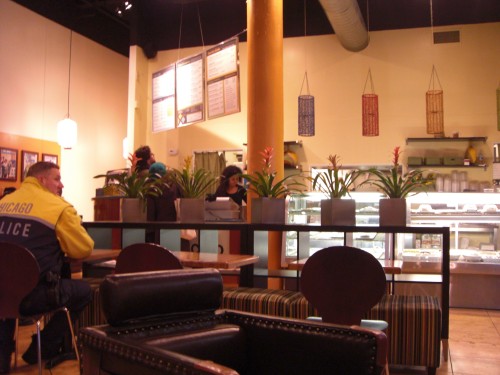 Cafecito focuses on reasonably-priced pressed sandwiches which are akin to paninis. However unlike paninis, Cuban-style sandwiches are pressed on a plancha grill – and have no grill marks. Cafecito’s most famous offering is their Cubano sandwich, recently rated as Time Out as the best in all of Chicago, which is no small feat. So naturally, when first visiting Cafecito, the Cubano was the sandwich of choice for most of our party. The hefty Cubano ($4.99) consists of the classic combination of roast pork, ham, swiss cheese mustard and pickles. The sandwich comes served on a pressed Gonnella roll (a Chicago touch). The flavors all melded together perfectly but the real standout was the juicy and tender roast pork. We can definitely see why this Cubano has won so much acclaim – our party practically inhaled the sandwiches. Though the Cubano appeared to be the most popular option – Cafecito has other sandwiches are worth noting. We can recommend two sandwiches with an excellent house-made Chimmichurri sauce – the chicken breast sandwich ($5.49) and the Choripan ($5.49) with Spanish chorizo.

We finished off the meal with some great, strong Cuban espresso with sugar $1.29 and hot chocolate ($1.99) which was good to take on a cold day to warm up. Cafecito also boasts a dessert counter full of miniature cakes and pasties, however it was pretty much empty buy the time we arrived. We are happy we found Cafecito – it’s a perfect lunch or dinner spot in the south loop – and will be a new go-to whenever we decide to hit the Art Institute. Or we just might make an extra trip or two for the Cubano.