Just in time for St. Patrick’s Day, have a look at the oldest published Irish Soda Bread recipe [Via Sodabread.us]. It comes from a November 1836 Farmer’s Magazine (London) p.328 referencing an Irish newspaper in County Down. 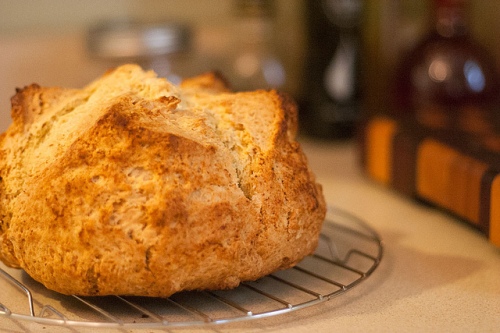 A correspondent of the Newry Telegraph gives the following recipe for making “soda bread,” memorablystating that:

“There is no bread to be had equal to it for invigorating the body, promoting digestion, strengthening the stomach, and improving the state of the bowels.”

“Put a pound and a half of good wheaten meal into a large bowl, mix with it two teaspoonfuls of finely powdered salt, then take a large teaspoonful of super-carbonate of soda, dissolve it in half a teacupful of cold water, and add it to the meal; rub up all intimately together, then pour into the bowl as much very sour buttermilk as will make the whole into soft dough (it should be as soft as could possibly be handled, and the softer the better,) form it into a cake of about an inch thickness, and put it into a flat Dutch oven or frying-pan, with some metallic cover, such as an oven-lid or griddle, apply a moderate heat underneath for twenty minutes, then lay some clear live coals upon the lid, and keep it so for half an hour longer (the under heat being allowed to fall off gradually for the last fifteen minutes) taking off the cover occasionally to see that it does not burn.”