A taste of Mexico at Maxwell Street Market

Birria, Huraches, tostones, pambozo, tacos, Canela Tea galore! Are we in the Distrito Federal? More like Maxwell Street Market. Maxwell Street Market is basically an open air food court of Mexican cuisine, combined with a totally eclectic outdoor flea market. Despite having lived in Chicago for a long time neither of the Eaters had ever been to the Maxwell Street Market (currently in its 3rd incarnation in its 100+ year history, on Des Plaines).

Though there are sports jerseys, knockoff sunglasses powertools and tchotchkes galore, we really came out for the food and produce. M could not resist hitting up the mobile truck, Churro Factory, which sell, unsurprisingly only churros. When we arrived at 11:30 they were already out of chocolate churros, unfortunately. Even as a second choice, M thoroughly enjoyed his vanilla cream-filled churro. However, the “out of food” saga continued to haunt us throughout our visit.

You know it’s a popular time (and that fall has arrived)  when the champurrado (a thick, spiced hot chocolate made of masa) is clear sold out at not one, not two but THREE locations. We were jonesing for some choco-cinnamon goodness so we kept looking. We ended up at La Paz, a food vendor that had a long line forming (which we took as a good sign) where they had only enough champurrado left to fill one cup, which we figured was better than nothing! Turns out we were not disappointed. 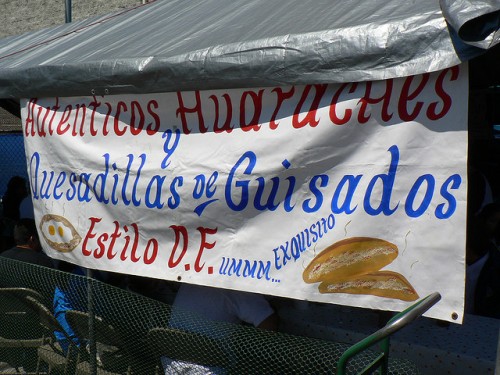 Along with our awesome Champurrado ($2) that was perfect for the slight chill in the air, we ended up ordering a Huitlacoche tortilla ($3.50), one of our favorites, and usually rather difficult to find in many Mexican restaurants. There was no room to sit at La Paz so we hunkered down under the kitschy pop art signs that marked the market’s presence on Des Plaines. On our way out we also picked up some purple tomatillos and cilantro for salsa fixins. We can’t beleive it too us so long to get here – but we’ll definitely be back!