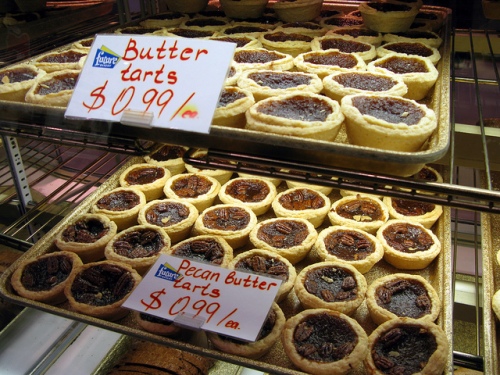 Butter Tarts in Toronto by Ursamajor

The Butter tart, along with the Nanaimo bar, is one of Canada’s most emblematic treats, and a perfect way to celebrate Canada Day on July 1st. The exact origins of the butter tarts are not known, though the treat is said to go back to pioneer days. Now you can find them across Canada, though their foothold is strongest in Ontario (where there is even a butter tart trail). The filling, as you might guess is primarily sugar and butter, with a little vinegar, though there may be some variations with nuts or raisins. The crust is a flaky pie crust, similar to an American pie, though butter tarts seem to usually come in miniature form. However, this is not an eggy custard like a Portuguese pastel de nata – it’s decidedly more sugary. Butter tarts actually sound kind of similar to a chess pie in the US, a Southern American classic. It is thought that both of these pies descended from a similar Scottish pie. I guess both come from the same principle – making a pie when there is not fruit available (or affordable enough) for filling.  Recipes for butter tarts abound on the internet – and you probably already have the ingredients on hand. Happy Canada Day!