We were in NYC right before Chinese New Year and found ourselves hankering for some good, cheap Chinese food. Vanessa’s Dumpling House (118A Eldridge Street, New York, NY 10002) came highly recommended by my cousin, who is always in the know. When we arrived on a bone-chillingly cold day, there was already a very large line, and huge trays of Beijing-style dumplings basically flying out the door. We knew we were in the right place.

The specialties of Vanessa’s are dumplings – obviously – but also an intriguing Northern-Chinese style dish – the sesame pancake. The sesame pancake was a must-have according to my cousin, and it was a completely intriguing dish to us, cooked in a giant round pan, and cut into manageable triangles. Despite the name “pancake,” this was basically a Chinese riff on focaccia bread. It had a light bread-y texture, coated with oil and topped with sesame seeds – a little greasy maybe, but totally delicious. And a slice is only $1! Yes, this place is crazy cheap. Vanessa’s takes the sesame pancake concept one further by even making sandwiches out of the sesame pancakes with fillings like beef and Peking duck ($2-3).

Onto the dumplings – we ordered a mix of fried and boiled. We got the four fried pork and chive dumplings for only $1.25, eight boiled veggie dumplings, and eight boiled chicken and basil ($4 for 8). The dumplings were perfectly formed and cooked to perfection, though we slightly preferred the slightly crispy skin of the pan-fried dumplings. We also appreciated the soy and chili dipping sauces that came with each order. It was a real treat to watch the production at Vanessa’s – talk about a well oiled machine. You can also pick up some 50-packs of frozen dumplings to enjoy in the comfort of your own home ($7-14). We took our goodies to go and heartily enjoyed our little taste of Chinatown. We can’t think of a better place to get a cheap dumpling fix – and you absolutely have to try the sesame pancake. 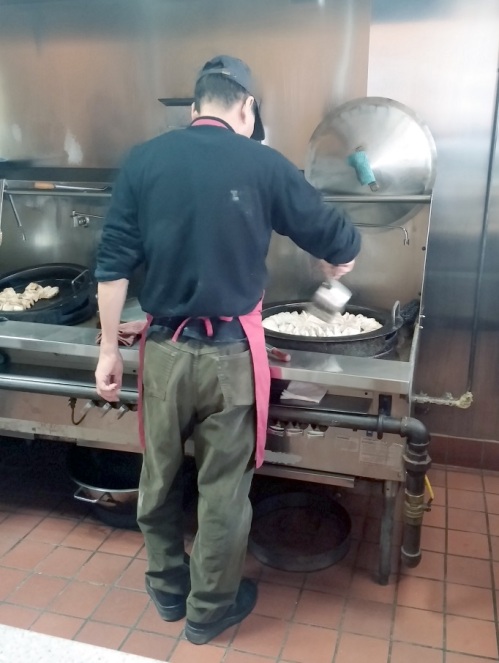 Batch of dumplings being cooked at Vanessa’s Dumpling House