The neighborhood of Astoria in Queens, NYC is known for its huge Greek population (which is still growing today), and accordingly, you can find some of the best Greek food in the city (and country) in this one neighborhood. It also means that a diversity of Greek and Mediterranean cuisine not seen elsewhere abounds. We were happy to find that one of the few Cypriot restaurants in the US was located in Astoria, Zenon Taverna (34-10 31 Avenue, Astoria, NY 11106 ).

Cypriot food is similar to what most Americans think of as typical Greek food, but with more Middle-Eastern influences, given its history and location. The menu at Zenon is staggering, with a huge option of cold and hot meze appetizers including favorites like hummus and tzatziki as well as more unusual options like quails and stuffed mushrooms. For entrees, there are dozens of pitas; chicken, lamb and fish platters; as well as meat and veggie samplers. Each day, there are also upwards of 6 specials including: Keftedes Kypriaki ($10.50 S / $17.99 L) pork and potato meatballs; Louvia me Lahana – blackeyed peas with Swiss chard ($6.50 S / $12.50 L)and pastitsio (a lasagna-like layered lamb dish). We didn’t really know what to pick, so we went with 2 samplers to share among our group, along with an appetizer of char-grilled octopus ($17.95) and Cypriot rabbit stew on special for the day- Kouneli Stifado ($19.95).

The Cyprus Meze sampler ($24.95 a person) came with a total of 16 meze – 8 hot and 8 cold. Everything was bright, fresh and delicious, but there were a few standouts. Zenon did a great job with classics like tzatziki and hummus, but we really loved some of the more unusual choices like the tarama – carp roe with potatoes and the fresh, vinegar-y pantzarosalada – beet salad. In terms of the hot dishes, there was a heavy emphasis on fish and pork. We highly enjoyed the smoked pork loin – lunza, the loukaniko spitisio – Cypriot pork sausage cooked in wine – and the keftedes arnisia – garlickly lamb meatballs. Of course another winner was the baked sheep and goat milk cheese halloumi, doused with lemon juice. The octopus appetizer we ordered was another favorite, and the special-of-the-day rabbit stew cooked in red wine was tasty, if a little game-y. 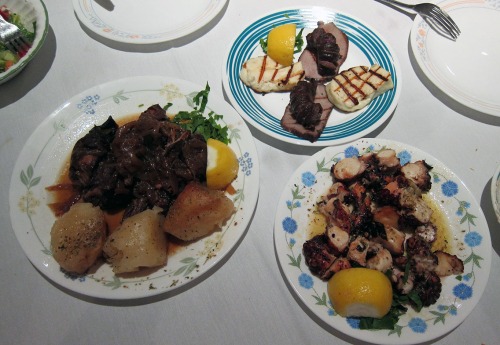 If you leave room for dessert, there is baklava and semolina desserts like siamali and halouvas, which you can wash down with a traditional frappe or Greek coffee. Alas, we did not leave room, since our Cypriot Meze order was so huge! We are a big fans of Greek food, and we really enjoyed trying something a little different at Zenon. One caveat – they are cash only! This is not a super-cheap place, so we went to the ATM in advance instead of testing our luck with the ATM around the corner. We recommend you come to Zenon with a crowd – there are so many dishes and mezes to share – the more, the merrier!