When we were in Rome for our honeymoon years ago, we stopped by a little walk-up pizza counter near the Vatican, the Pizzerium, run by renowned pizzaiolo Gabriele Bonci. The pizza was delicious, and served al taglio – by the piece – which in the case of Roman-style pizza means cut by scissors and priced by weight. Roman style pizza is served on a somewhat thick crust with the texture of focaccia bread, with an abundance of topping varieties. We never expected to have Bonci pizza again (short of taking another trip to Rome) so we were floored when we heard that Bonci himself was opening his first overseas location in Chicago. Bonci himself supervised the opening of the Chicago shop, the eponymous Bonci (161 N Sangamon St. Chicago, IL)  over the summer of 2017, and by the time we arrived in December, it seemed to be a well-oiled machine.

The Chicago Bonci location was similar to the Roman one – except supersized. The concept is the same – you peruse the pizzas on display and get slices to order, which are then, cut, weighed, heated up and brought out to you. When we were at Bonci there were at least a dozen pizzas on display. They varied by weight but most were $10.99 – $14.99 a pound. You can get any size you want, but we went with the smallest samples possible so we could try many varieties (which ran us about $3.50). The flavor combos ranged from classic margherita, to spicy meatball to salmon, and there is something for every taste. We started out with 3 varieties, but then went back for 2 more. 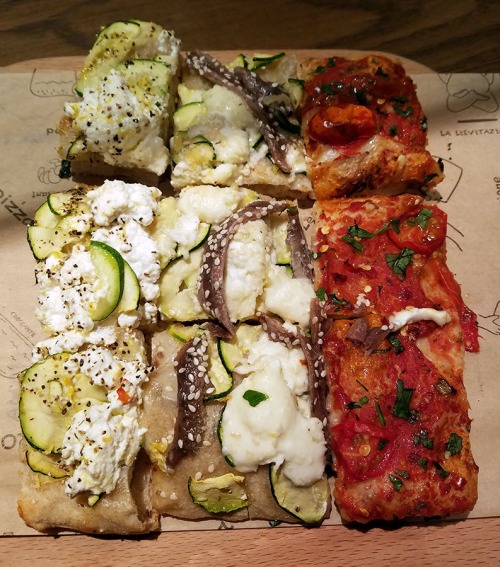 On our first trip we sampled ricotta, zucchini and lemon; anchovy and zucchini; and arrabiata (red sauce and spicy pepper). We followed up with potato and rosemary, and arugula and prosciutto. As we waited for our order to be heated up, we grabbed some stools behind the counter and watched the pizzaiolos do their thing – pressing the dough into rectangular pans and sprinkling toppings across the surface. One of the great things was that in less than 20 minutes, there were already some new pizza varieties to try on our second trip. We really enjoyed all of the pizzas, and we appreciated the attention to detail in the chewy, flavorful crust and all of the super-fresh toppings. Most of the pizzas did not come with red sauce, and all of the cheeses were fresh and delicate. Our favorite slice of the day was the ricotta with lemon, which was light, fresh and bright – and we felt like we could eat a whole pizza! 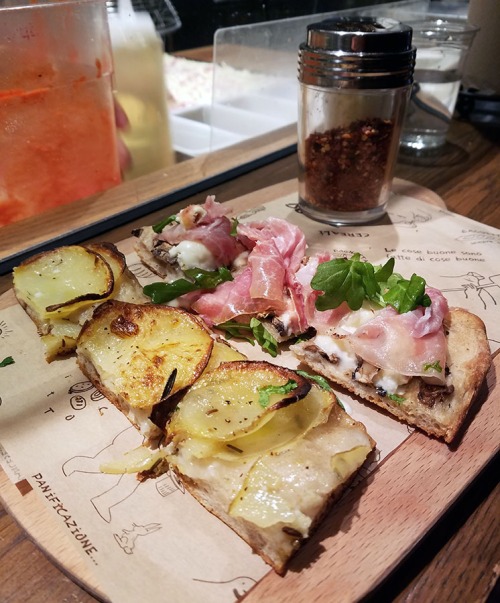 The service at Bonci was also excellent, and when the GM noticed that our slices did not have enough arugula, he brought some over himself. If you are thirsty, there is still and fizzy water on tap along with a selection of Italian soft drinks, single-serve wines and beers. Unlike the Rome location, there are counters along the wall to sit, though a good deal of the patrons were taking their pizzas to go. All told, we were stuffed with top-notch pizza for less than $20. If you like high-quality pizza, we highly recommend that you give Bonci a try – it is a little slice of Rome right here in Chicago.