Southern US: Hominy Grill in Charleston

We absolutely love Southern foodways and Chicago actually has some pretty good options. But since we were in the Southern foodie haven Charleston earlier this year we figured we would find some excellent southern food that would blow our Chicago options out of the water. The only problem was there were so many options! In our research, we found a few names that always came out on top, including Hominy Grill.

Hominy Grill is located in old red house, covered in vintage sign paintings including one that proclaimed “Grits are Good for You.” Now that is a health message we like. The inside of the house/restaurant was charming, with simple wooden tables, a whitewashed tin ceiling and ever-spinning ceiling fans. Between the two of us we ordered she crab soup ($4.50 for a cup) and fried green tomatoes with ranch dip ($4.25). Though fried green tomatoes seems to be a one of those dishes that always graces a Southern menu, neither M nor I had ever actually had it before. Both the soup and grits came out piping hot. The soup was decadently creamy and the fried green tomatoes were pleasantly tart. Though both of our appetizers were very good, we were most looking forward to the entree. 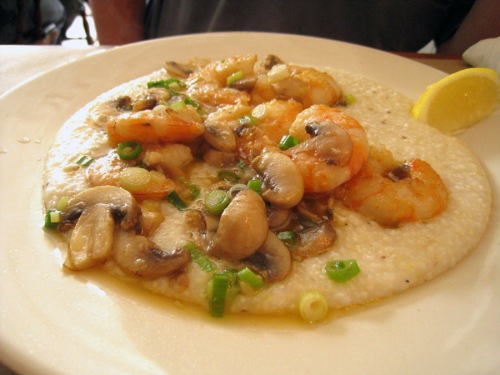 The pièce de résistance was without a doubt the shrimp & grits ($16.95), for which Hominy Grill is justifiably famous.  These shrimp and grits were gussied up with mushrooms, scallions and bacon, as well as a little garlic. They didn’t skimp on the shrimp and when they said cheesy – they meant it. The shrimp and grits were phenomenal – we have never had better! We regretted slightly not ordering two orders of shrimp-and-grits, but despite the sign on the outside we are not sure that would have been the healthiest thing to do. Had we been in Charleston for longer I can guarantee we would give Hominy another visit. We found a recipe for their grits in Southern Living Magazine, but I suspect they will not quite be the same.

Tagged as Charleston, grits, shrimp and grits, Southern US

Charleston is a beautiful city, almost freakishly so – it seems like every elegant building is perfectly preserved in time (okay, maybe this creeps us out just a little). Amidst the grandeur, we noticed a relative lack of independent coffee shops. However, Kudu coffee house, an African-themed coffeehouse is filling the void.  What really sets Kudu apart is its extensive selection of single-origin coffees from all over the continent: Cameroon, Ethiopia, Kenya, Malawi, Rwanda and Tanzania. A must-get is their signature Meru Mocha – a drink made from chocolate, mint, espresso and steamed milk. Kudu’s decor is bright and sunny, with African art pieces, flags and plants gracing the walls. Kudu also boasts a cool courtyard, and free wifi. Even on a hot summer day, the place was filled with groups of people puttering away on laptops.