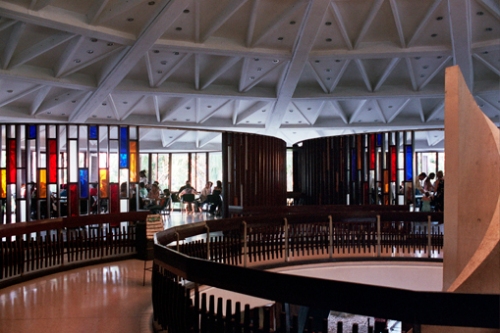 In many countries the water and gas industries are nationalized. But how about the ice cream industry? Well, that’s the case of Coppelia, the official ice cream of Cuba. After the revolution, ice cream could not be imported, so Cuba created a homegrown alternative. Every town in Cuba has a Heladería Coppelia, but the centerpiece of the Coppelia empire is located in Havana. The Havana Coppelia building is a mid-century marvel, made of colored glass in steel, and designed by Mario Girona 1966. The whole complex takes up nearly an entire block in the Vedado district of Havana and seats over 700. The Girona building rose to some fame after it appeared in Tomás Gutiérez Alea’s 1994 film Fresa y chocolate (Strawberries and Chocolate).

What is interesting is that there are in fact 2 lines at the Havana Coppelia, one for tourists who are paying dollars, and one for locals paying in pesos. Needless to say the tourist line tends to move faster. When Coppelia first opened it boasted more flavors than Baskin Robbins at the time, though a selection 2 or 3 flavors a day is the standard nowadays. The logo of Coppelia stores are ballerina legs, as seen above, surely a reference to the ballet Coppelia.