Kolaczki are woven into Chicago food culture so deeply that it took me a while to realize that they were indeed a “foreign” cookie. Kolaczki dough is made with cream cheese, and it is traditionally folded (as below) over a filling of fruit – raspberry, plum or apricot usually – or sweetened cream cheese. Originally, the kolaczki is said to be from Poland (though its exact origin is unknown), and are popularly seen around the holidays. They seem to be just as popular in Cleveland, where we learned that they are known as Kiffles in Hungarian. This type of cookie is found throughout Central and Eastern Europe, with several variations, including a circular shape. Even more confusingly, there are many similarly-named desserts, including the Czech kolache, which is more like a yeast roll, and is most popular in Texas (post forthcoming)! Here is a recipe for apricot-filled kolaczki from American Heritage Cooking, another apricot from Cooking the Globe and one for cream cheese from All Recipes. 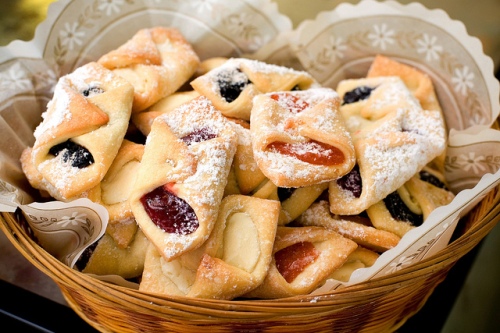