Malasadas on Fat Tuesday in Hawaii

It’s Mardi Gras / Fat Tuesday / Carnaval! Hope you are having a festive time, or at least enjoying some festive treats. We’ve written about many Fat Tuesday goodies in the past including the inimitable Chicago doughnut staple, the Paczki. Like the Polish Paczki, the Portuguese malasada is a filled doughnut without a hole, eaten as a last indulgence before Lent. The malasada first came to Hawaii with Portuguese immigrants in the late 19th century, and has since become immensely popular in Hawaii as well as in Madeira and the Azores. Due to the treat’s popularity, Shrove Tuesday in Hawaii is informally known as “Malasada day” and at the iconic Leonard’s Bakery in Honolulu (933 Kapahulu Ave, Honolulu, HI 96816) you can even get plush Malasada toys alongside the coveted pastries. Traditionally, Malasadas were not filled, but today in Hawaii you can get fun fillings like Coconut (Haupia), Chocolate and Passion Fruit. Saveur even has a recipe for Leonard’s signature Malasadas. 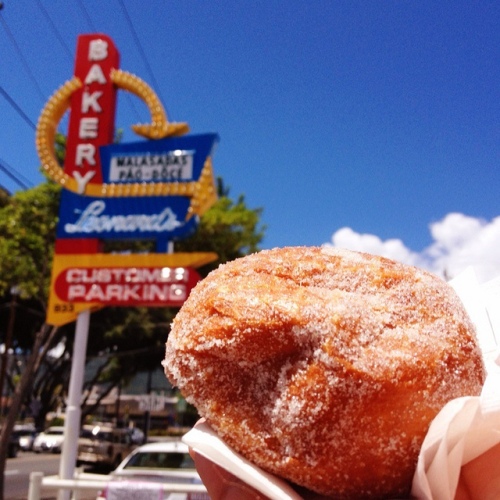 Malasada at Leonard’s Bakery in Honolulu by Albert Lynn