While we have always enjoyed Japanese cuisine, we don’t consider ourselves experts. But we do consider our friends R & R to be Japanese food experts, given their years of experience in Japan and a passion for Japanese food. They recently opened out eyes to a whole new dish when (just as the weather turned colder) they invited us over for some Nabe (or nabemono 鍋物, なべ物), a warm, hearty, wintery stew. Nabe’s name derives not from its ingredients but from the pots used to make it (donabe), which also are heated to keep the dish warm on a portable burner after it has been served. A true stew, nabe can be made with pretty much anything you have a taste for. 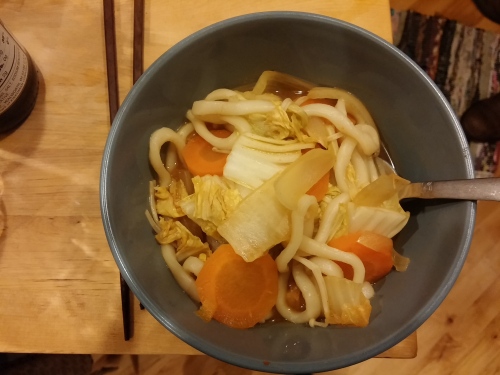 Typically this begins with special nabe broth, which can be purchased pre-made in packets in a variety of flavors. One then adds veggies and many add-ins along with a dipping sauce, which are then cooked with long metal cooking chopsticks. A particularly hearty chicken and fish nabe is also known as “sumo nabe,” Chankonabe (recipe here), since it allegedly helps sumo wrestler pack on the pounds. The nabe R & R made was composed of a spicy kimchi broth, cabbage, carrots, noodles, mushrooms and meatballs, and was delicious, hearty and filling. You also use the leftovers to make a fried rice dish, which was amazing. Our first taste of nabe made us hungry to try more in the future. Spicy pork and seafood nabe sounds good, no? Thanks R & R, for introducing us to the vast world of nabe!