We are all about a good bakery, and though we have visited many Italian, Mexican, French and Portuguese bakeries over the years, other countries have flown under the radar. But here in Cleveland we recently came across a bakery dedicated to all things Swiss, Zoss Bakery (12397 Cedar Rd., Cleveland Heights). Who knew? The concept of the Swiss bakery reminds us of New Glarus, Wisconsin, a fully Swiss-themed town, which we visited many moons ago at the start of our ETW journey. Zoss Bakery is located in a small, nondescript building in Cleveland Heights, just east of Cleveland, and is helmed by an actual Swiss baker, Kurt Zoss. 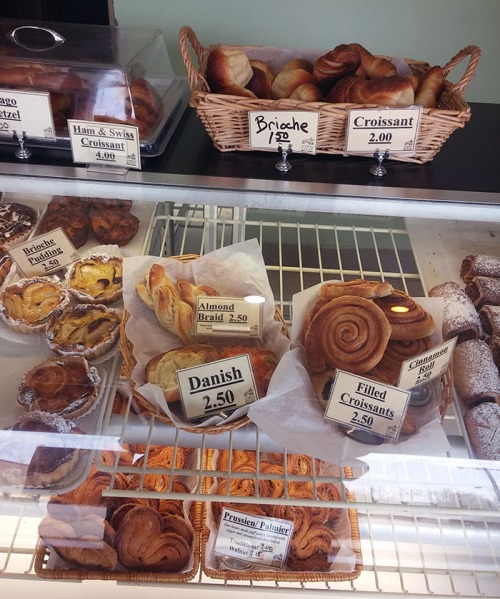 Though small, the bakery is well stocked with all manner of sweet and savory goods. There are many different types of bread on the back wall: baguette, honey wheat, sourdough, multi grain, brioche and the unusual Krustenkrone, a ring of bread composed of smaller rolls. There were also several types of croissants, both sweet and savory (almond, chocolate, cheese, ham, etc.), and Bavarian pretzels (we had to get both a croissant and pretzel – both of which were amazing). There are also more Americanized offerings like chocolate cookies, coconut macaroons and muffins. 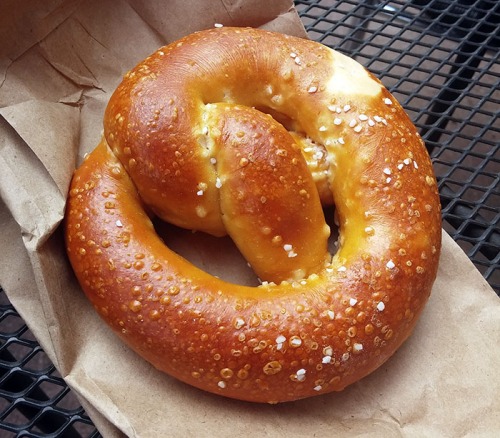 There is also a cooler with a variety of chilled desserts, which is where the really interesting stuff was hidden. There were a variety of Swiss treats including the classic chocolate and apricot Linzer torte, apple strudel, and a flourless chocolate torte. We were also intrigued by the most geometric dessert we have ever seen, the perfectly-triangular Nussecken, which was composed of two pieces of hazelnut shortbread with apricot jam, with a coating of chocolate – delicious! We were excited to sample some more esoteric Swiss treats at Zoss, and hope to be back soon for more inexplicably geometric pastries.

Bretzels at the Chicago Christkindlmarket

One of the great holiday traditions in Chicago is visiting the German-inspired Christkindlmarket in Daley plaza in Chicago. At the Christkindlmarket, you can get your fill of German and America treats, buy some of the famous German glass ornaments (including the famous pickle ornament), and pick up a commemorative mug of spiced wine, Glühwein. As for other food and drink, you can also get döner, sausages, roast nuts, stollen, potato pancakes, strudel and more. However, for us, the treat of choice is the Bavarian pretzel aka bretzel. When we were in Germany this was our favorite snack, and there are several varieties available at the Christkindlmarket from the Pretzel Haus stand (from Bad Oeynhausen) for less than $5 apiece. We go for the classic bretzel, though there are cheese-filled and sugary varieties as well. It is the prefect market day food- warm, filling, and portable! Christmas Eve is the last day the Christkindlmarket is open – so don’t delay in getting your holiday bretzel.

A revelation! Somewhere to eat in the loop for lunch or after work. That is – somewhere that isn’t Dunkin’ Donuts or Starbucks. You can find this little, 4-seater organic cafe on the corner of Washington and Wells, next to Corner Bakery. The specialty is the Bretzel, the proper German appellation of “pretzel”, which you can get with nutella, preserves or cream cheese. Alongside this eponymous specialty, HB makes a mean gourmet sandwich (Turkey, gruyere, and many more). For a snack or pick-me-up, the store is also jam-packed with a selection of coffee/tea drinks and a mind-blowing assortment of international organic chocolates. In fact there is an entire wall of chocolates for the choosing.

HB claims to be the only organic restaurant in the loop. No preservatives, no splenda, and no american cheese (praise!). Even the drink cups are made from a biodegradable corn material. All in all, we are in love with HB, and we recommend all of our Chicago friends check it out. The grub is great, the price is right, and you won’t be supporting the chain-restaurant regime. Plus, it sure as hell beats Auntie Anne’s.