March 19th marks St. Joseph’s Day (check out this previous link to find all of our previous St. Joseph’s day posts), a traditional feast day in Italy honoring St. Joseph and his sparing of Sicily from famine. The tradition has now spread widely throughout Italian diaspora communities, especially those with many Sicilian origins. This St. Joseph’s Day is bittersweet since we are unable to go to New Orleans this year, and are celebrating at home, alone. Typically, New Orleans has some of the most elaborate and ornate St. Joseph’s altars and homes, churches and community groups go all out (though not this year of course). Since we have nowhere to go, we are making a small altar of our own this year, including baking some St. Joseph’s Day treats.

Traditionally, on a St. Joseph’s Day Table altar there are copious citrus fruits, cakes, lucky fava beans and other offerings, as you can see above. You also usually sit down for a vegetarian meal, typically including pasta con sarde (which we are making for dinner tonight). After visiting an altar you also usually get a bag of cookies and some lucky fava beans to take home. The types of cookies vary, but you will traditionally get some cucidati and some reginelle / Biscotti Regina (sesame seed cookies). This year we decided to make reginelle, as you can see below, since they are one of our favorite cookies any time of year, and are super easy to make. We used the recipe from Southern Italian Desserts by Rosetta Costantino. I can’t find that recipe online, so there are dozens of other versions to try: Ciao Italia, Marisa’s Italian Kitchen, or A Sicilian Peasant’s Table. Buon Appetito!

We have already sung the praises of the zeppole for St. Joseph’s Day (March 19), but it almost always overshadows the similar fried confection, the sfinge (or sfingi). The sfinge, like the zeppole, is stuffed, fried dough with Southern Italian origins. However, while the zeppole is filled with custard, the sfinge is filled with ricotta cream, much like a cannoli. Both are topped with candied fruit. We also think the sfinge has more of a cream puff texture versus the doughnut texture of the zeppole (don’t tell, but we might like sfinge better!). You can find sfinge around March 19 at any good Southern Italian style bakery. This is one treat we wont be attempting to make at home, but here is a recipe from Cooking with Nonna, of you are feeling advanced. We especially like the sfinge from Angelo Brocato (214 N Carrollton Ave.) in New Orleans and Palermo Bakery (7312 E Irving Park Rd) in Norridge, right outside Chicago. Astoria, Queens is also a hotbed for Sfinge.

We are heading to New Orleans for two of our favorite only-in-New-Orleans events, St. Joseph’s Day (March 19) and the Sunday closest to it, known as “Super Sunday” (which we can assure you has nothing to do with the Super Bowl). Super Sunday is the day when Mardi Gras Indians parade their finery through the streets, and St. Joseph’s Day is a holiday with origins in Sicily that celebrates the miracle of St. Joseph saving the island from famine (see our previous coverage here). And oddly enough, these two days are related, and Mardi Gras Indians also march on St. Joseph’s night.

The altar at St. Francis Xavier Church in Metairie, LA

Though other areas in the US obviously have Sicilian-American populations, the tradition of the St. Joseph’s Day altar is observed with fervor in New Orleans, owing to its particularly concentrated Sicilian population. St. Joseph’s Day is observed in New Orleans to a much larger degree than it is elsewhere, even Sicily. Every Catholic church and high school in greater New Orleans seems to have an elaborate St. Joseph’s Day altar, and they can range from modest altars in homes to unthinkably huge, sometimes taking up the entire Church community center. The altars, contributed to by parishioners and the community, traditionally have three tiers and are decked out with statues, flowers, photos, candles and food. All of the photos in this post are from altars we visited in 2016.

Typical St. Joseph’s Day altars are decked out with tons of food, including citrus, fanciful breads in shapes representing Joseph’s trade as a carpenter (or even fish or figures), whole fish, dozens of varieties of cookies, fava beans, and more (You may even see a lamb cake or two). And if you visit a church on St. Joseph’s Day in New Orleans you will probably be treated to a bowl of Pasta Milanese or other meatless favorites. Pasta Milanese is similar to pasta con sarde, but with tomatoes, and of course you have to top it with breadcrumbs, representing the Joseph’s carpentry sawdust – check out this recipe from Sicilian Girl.

Our favorite St. Joseph’s Day food is probably the fig-filled cuccidati cookie, which are also traditionally made at Christmas. We bought a cookbook on St. Joseph’s Day at one of the churches we visited a few years ago, which now provides us with our go-to cuccidati recipe. The St. Joseph’s Day altars are cookie heaven, and volunteers spend weeks making literally tens of thousands of cookies for some of the larger altars. We also like to seek out some of the unique foods that are probably unseen outside of a single parish, like the amazing, giant, fleur-de-lis crawfish-shaped “Craw-fig” cookie below, that we spotted on an altar in Metairie.

The altar at St. Francis Xavier Church in Metairie, LA

At the end of St. Joseph’s Day, the altar is symbolically broken in the “Tupa tupa” ceremony and the food and donations are distributed to charity. You will probably also get handed a fava bean for luck, and a bag of cookies to take home. And if you manage to steal a lemon from the altar it means you will get married (or have a baby) by the next St. Joseph’s Day. We love to go around New Orleans and the surrounding area on St. Joseph’s Day and visit all of the altars, since no two are alike. For 2018 we found a few guides (Italian American Center, ABC) to all of the St. Joseph’s Day churches in the area. 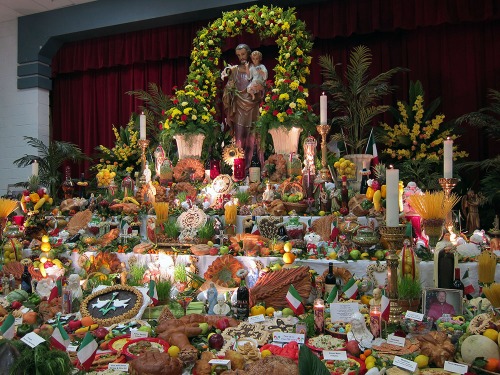 The altar at St. Joseph Church in Gretna, LA 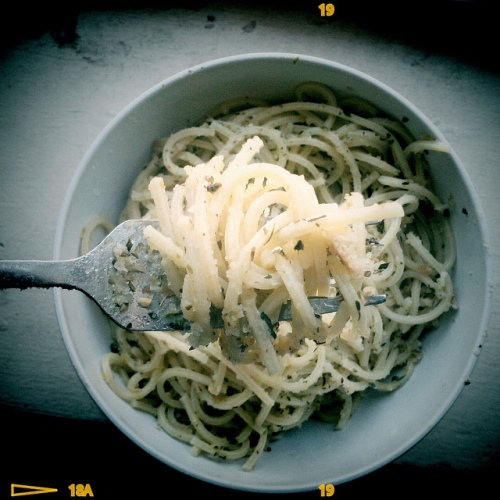 March 19th is St. Joseph’s Day, a holiday celebrated in Southern Italy, or in communities of southern Italian Immigrants. Naturally, having the proper food is a huge part of St. Joseph’s Day, with many churches even constructing elaborate St. Joseph’s Day altars full of food. We’ve written previously on the most famous St. Joseph’s Day food – the fried sweet Zeppole – so this year we wanted to introduce another holiday dish – Pasta di San Guiseppe. There are many variations on the recipes – but at its core it is a dish of pasta and breadcrumbs. The pasta dishes made on this day are typically meatless to represent the famines experienced in Sicily. The breadcrumbs represent sawdust, which is symbolic of the profession of St. Joseph, carpentry. Another popular dish for St. Joseph’s Day is Pasta con Sarde (Pasta con Sardi in Sicilian)  – pasta with Sardines [another version here].