The 3.3 million Assyrians alive today have not had a country of their own in over 2,000 years; and even if it still existed, the Assyrian Empire is not exactly near the Sahara. Nevertheless, an Assyrian family founded Sahara Kabob on North Clark Street in Chicago, and while we still do not understand the name (though it is better than the previous name, “Big Buns and Pita”), we cannot argue with the seemingly endless amounts of really cheap, really tasty food. 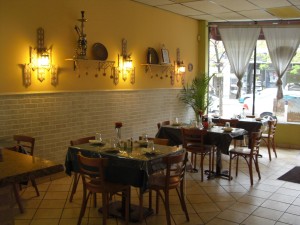 We should have realized what we were in for when the reviews on Yelp said “humongous portions.” Not heeding their advice and logically thinking two dinner portions would be just enough for two hungry people, we set about making our menu choices. It was a busy night, so we opted for carry-out. The Combo Plate seemed like a good option, with helpings of chicken and kefta (ground beef and lamb) kabob and chicken shawirma served on white rice (my choice over couscous) with small sides of grilled and pickled veggies. Turns out it also comes with a soup – I picked douckua, a thick concoction of meat and barley in yogurt sauce. L went with the vegetarian route, picking the falafel plate (it comes with eight pieces) over couscous with lentil soup on the side. We added in a small appetizer of boorek, meaty egg rolls with chili dipping sauce, and figured we had enough for dinner.

When we arrived at the restaurant 20 minutes later (note the quick turnaround time on our order) we were greeted by simple, no-frills décor with enough artifacts to lend an air of Assyrian authenticity to the place. It helped that the only other customers were speaking a Middle Eastern language we did not understand – always a good sign when ordering

non-American food. When our food came out, we were shocked by how much we were getting. Two completely full take-out boxes, two full bowls of soup, plus the bowl of couscous, the boorek, and a small assortment of complimentary dipping sauces. All for $20. As she wrapped up our order, the server asked if we liked baklava. We gave a hesitant yes, thinking she would push us to buy some, but were surprised when she plopped a free serving right into our bag. At this point, we knew we had ordered way too much food. But was it way too much good food?

Yes. We started with the boorek, a really interesting marriage of an egg roll with a spiced meat filling and a dipping sauce that tasted like Sriracha. The lentil soup was excellent as well, flavorful and light (though not as good as the reigning favorite from Taste of Lebanon). The douckua I ordered cannot really be classified as a soup – think of it more as a meat salad with a strong, flavorful yogurt sauce laced with special seasonings and barley. L did not much care for it, but I thought it was interesting and new, and definitely worth a try. L’s couscous was a lit

tle disappointing, tinged with almost a Ms. Grass-like flavor, but the rest of the meal was a home run. My combo plate was solid all the way around from shawirma to the kabobs, with solid cuts of beef, lamb, and chicken all grilled to perfection. L’s falafel was solid as well, easily compared to other excellent falafels we have had in the past.

Good as the food was, if there is one reason to order from Sahara Kabob, it is that you can easily double the value of your money over similar places. Our $20 gave us both two days worth of solid meals – on the first night, I was barely able to put a dent in my combo plate after eating the boorek and the douckua. Add on to that the satisfaction of supporting a family-run, locally-owned business and you have the makings of a great north side take-out (or dine-in) stop.