The eaters will be in Brazil for the next two months, based principally in Salvador, capital of Bahia state and one of Brazil’s most distinctive culinary destinations, featuring a host of African-inspired cuisines. Of all Bahia’s treats, none is better-known than the ubiquitous acarajé, sold on nearly every street corner, particularly in the more touristic districts of Barra and Pelourinho, and the vibrant Rio Vermelho neighborhood. 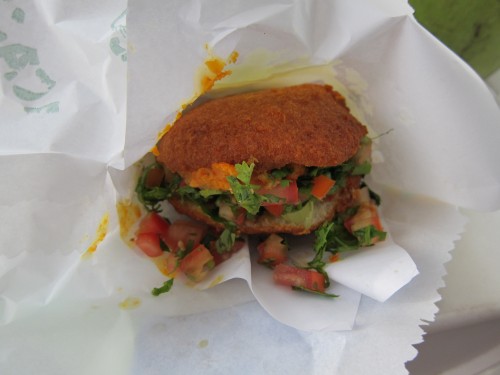 I had read many descriptions of acarajé before arriving in Bahia, and was excited to finally try the product, especially one produced by one of the many Baianas, with their white hoop skirts and Candomblé religious beads, who have a near-monopoly of the acarajé industry in the city. I plan on trying multiple acarajés in the city before we come back in March, and this was my first, from a lovely woman on the largo where Avenida Cesar Zama hits the oceanfront road of 7 Setembro in the Barra district.

In the simplest sense, acarajé is skinned white or black beans mashed together into a ball and fried in a distinctive and strong-flavored oil from the dendê palm tree that grows along Bahia’s coastline. Once fried, the ball is sliced in half and filled with your choice of toppings. These can very from locale to locale, but typically they consist of four options: small dried shrimp, fried okra, a salad of tomatoes and cilantro, and vatapá, a thick orange paste made from ground dried shrimp, cashews, coconut milk, and dendê oil.

For those of you who are fans of falafel  (as we are, seen here and here and here), you will find its taste and texture very similar to acarajé. At first I thought this was coincidence, but some recent research has traced the origins of acarajé – a Yoruba dish from southwestern Nigeria – to a trade and raiding relationship with Arabs from the eastern Mediterranean about one throusand years ago. The dish was then brought over by enslaved Yorubas to Bahia during the first half of the 19th century, where it morphed into its present form using local Brazilian ingredients.

Though the falafel similarity is undeniable, I would say acarajé is overall larger, more bready, and more of a container in its own right than a filler. Add the fixings on top – I went with just salad and vatapá (I’m not a big fan of okra, and the shrimp usually cost extra) – and you get a solid snack, or meal if you are not that hungry, for 3.50 reais (about $1.80). Tomatoes and cilantro were as solid as can be expected, but the vatapá was a little surprising. I expected more of a mixture of ingredients, but this was a thorough paste, something like a strong-flavored and slightly spicy hummus.  I bought two on an empty stomach, and was over-full by the time I finished them. In my hammock with a chilled coconut, of course.

Hopefully our next report from Bahia will be a moqueca review – another one of our favorite dishes! 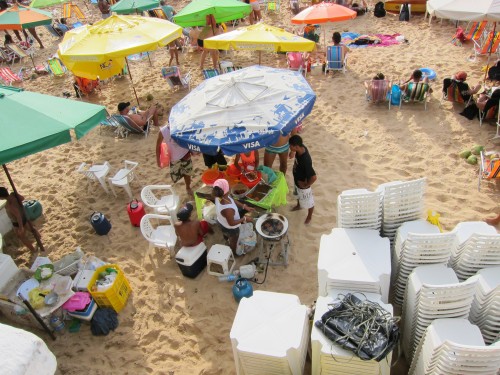