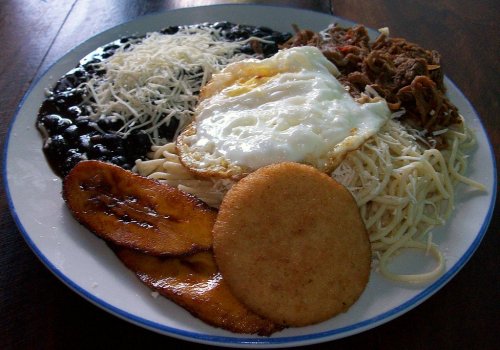 Many congratulations to fencer Rubén Limardo, winner of Venezuela’s first Olympic gold medal since the 1968 Mexico City games. In honor of this achievement, it’s time for some Venezuelan food! When we think of Venezuelan cuisine what immediately comes to mind are arepas – filled pockets of corn dough that strike the perfect carb-to-filling ratio. Though arepas are popular – the quintessential Venezuelan dish is Pabellón criollo (which translates roughly to “Creole Flag”) – a comforting dish of rice and beans with shredded beef. Similar variants of the mother dish of rice and beans are popular throughout South and Central America, as well as the Caribbean. Fried plantains are also an essential component of Pabellón criollo and for a variation, you can get your dish served with a fried egg, which is called a caballo (“on horseback”). The secret to the dish, however, is in the sofrito, the fragrant triumvirate of bell pepper, onion and garlic.  What’s for Eats has a delicious-sounding recipe as does Venezuela cooking (with each component broken into a separate recipe)– seems like good party food!