It seems like the iconic sugar skulls for Día de los Muertos/the Day of the Dead, have become increasingly popular in mainstream US culture – I have even seen recommendations for calavera Halloween costumes! But we cannot forget about the other sweet staple that is a necessity for any ofrenda (an altar set up to commemorate the dead) – Pan de Muerto – literally, “bread of the dead.”

An Altar in Seattle with Pan de Muerto – by jeck_crow

Dia de los Muertos as celebrated today is a combination of Pre-Columbian and Catholic traditions and encompasses All Saints’ Day (Nov 1) and All Souls’ Day (Nov 2). The purpose of the holiday is to commemorate and celebrate deceased ancestors and relatives, and the purpose of the pan de muerto on the ofrenda is to provide sustenance for the souls of the returning relatives. For this same reason, other favorite foods and drinks of the deceased are included on the ofrenda. However, not just used as an offering, Pan de muerto is also eaten in the period leading up to Día de los Muertos, and is a mainstay in bakeries and cafes during the season. 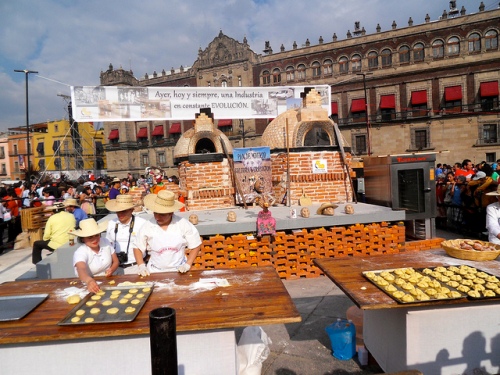 Pan de Muerto in the Zocalo, Mexico City – by Ericrkl

Pan de muerto is a simple sweet bread, think brioche, that is flavored with orange blossom water, orange zest or anise (or all of the above). Pan de muerto takes on different shapes, depending on the region, and the iconic Mexico City version of pan de muerto is usually round with strips of dough representing bones crisscrossed on the top. Pan de muerto may be topped with sesame seeds or a generous helping of sugar (as seen below). Though the round versions are the most common in the US, other other versions have the bread made in the form of little people, bones, angels or even for elaborate shapes. Check out this recipe from Cooking in Mexico to make some Pan de Muerto of your own. Kitchen Parade even has a tutorial to show you how to make the distinctive “bones” for your bread.