On our short trip to Madrid we wanted to cram in as much food fun as possible. We had previously experienced the frenetic market scene of San Miguel, and we wanted to take things a little slower for our second foray into Madrid tapas. Spaniards do not eat dinner until 9-10 PM at the earliest, so tapas serves as a kind of happy hour snack, where you can drink, have some munchies and meet with friends. However, Americans tend to buck this tradition and make tapas more of a meal. Alas, so did we, as we found ourselves famished at the odd-for-any-nation hour of 3 PM. In Spain lunch may even run as late as 2:30 or so, so I guess we fell into the late lunch crowd rather than the geriatric early-bird crowd.

The specialty at Li Mi Venta is tapas (along with a limited selection of main courses). The tiny restaurant consists of a bar and a back room with a few tall tables. You could get most of the offerings in a large portion or as a tapa – so depending on how hungry you are you can either try many different little plates or stock up on a favorite. We decided to go with a variety of meat and vegetables. And of course M could not resist getting his hands on some more rare and delicious Jamon Iberico. As another meat dish we sampled was spicy chorizo “from hell” (how could we skip it), and migas, one of the more unusual offerings, a composed plate of fried breadcrumbs, peppers and chorizo. We were shocked by the reasonable prices – everything was under 3 euros.

However, not all of our selections were so carnivorous. We also ordered the manchego cheese, which was excellent (but not as good as in the market). M’s favorite selection was the Tuna bocadillo with tomato confit, a delicate combination that really worked well. L also enjoyed the Spanish Tortilla (potato omelette), and could have gone for another slice or two. To finish our tapas “meal” off we decided to end on a paradoxically healthy note: Salted tomatoes in olive oil (8€). Such a simple dish – but it was extremely tasty and refreshing. The portion was also extremely generous, justifying the higher price.

In addition to tapas, there was a nice selection of teas and coffees that came served in little silver pots. They also had free wifi, though that seemed a little incongruous with the other offerings. We also appreciated the friendly and attentive waitstaff and the pleasant ambiance. It’s almost as if you are eating in a private wine cave – it would definitely be a great place to have a small party (maybe someday). La Mi Venta was a welcoming place with a great selection of fresh, well-prepared tapas. For less than 30 euros we were full for the entire day! 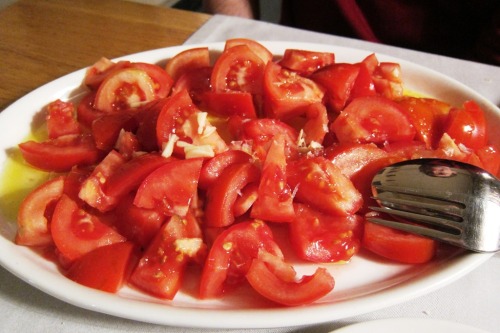 A giant plate of tomatoes – simple but delicious.

One response to “La Mi Venta, Excellent Tapas in Madrid”