A Rainbow of Hatch Chiles in Hatch, New Mexico – by Steev Hise

If you are lucky enough to be in New Mexico this weekend, one of the US’s great food events, the Hatch Chile Festival, is occurring. The Hatch Chile Festival is dedicated to all things related to the iconic green pepper of New Mexico. Hatch, New Mexico has even earned the honorific of being the “Chile Pepper Capitol of the World.” The name “Hatch” chile can actually refer to a variety of closely-related species, many first bred by new Mexico State University (a close analog is the less-spicy Anaheim pepper). Hatch chiles are famously green, and are harvested in late summer (just about now) before fully ripening. The chiles are then fire roasted, often on a large scale (as seen below). If they are left on the vine to fully ripen later into the fall, they indeed turn red! 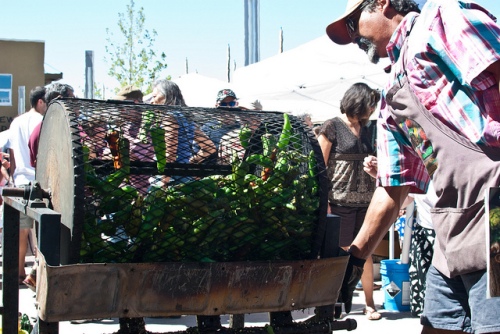 Hatch chile verde is emblematic in new Mexico and is a classic choice that has as many recipes as there are cooks (which you can even make without Hatch chiles). But, like any good pepper, Hatch Chile can be used in a huge number of dishes, and as Hatch chile harvest season rolls around, creative recipes tend to pop up:

Though, mostly confined to the Southwest – there are still a few ways to get a Hatch chile fix – you can order them online at various stores. If anyone has any hints on where to get Hatch Chiles in Chicago, clue us in!