We have a major obsession with macarons, and we ranked the macarons at Ladurée in Paris as our favorite. So how excited were we two weeks ago to be visiting friends in New York, home of a North American outpost of our favorite macaron purveyor. The Ladurée in NYC is on the upper east side (864 Madison Ave, New York, NY 10021), within a stone’s throw of the Whitney Museum. We went on Saturday afternoon expecting a line… and we got one. However, the crowd control was a bit more organized than the Paris location. Here in NYC, there was a bouncer to let only 20 people into the shop itself at a time. It took us about 20 minutes to get to the counter to order, and once we were there, it was only minutes until we were reunited with our macarons. 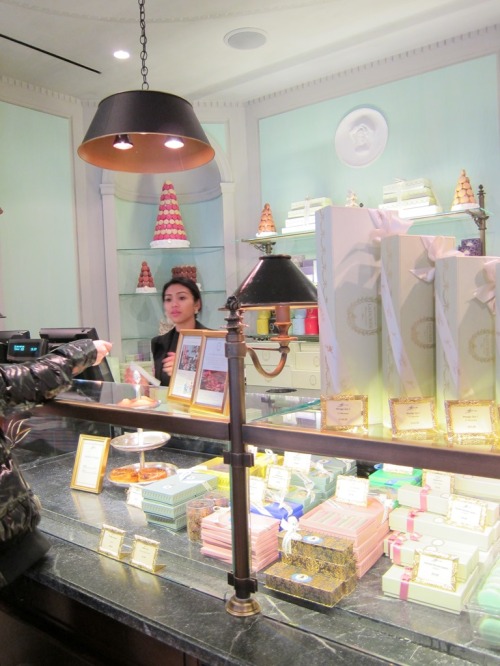 The store was just as picturesque as the original French outpost, all done up in pastels, with mirrored cabinets and little towers of macarons perched on ornate boxes. In addition to macarons, the store was jam packed with chocolates, jam, ice cream and even coffee. Of course, there was also a huge selection of food and trinkets emblazoned with the Ladurée logo. Yet as always, we were single minded in our mission. 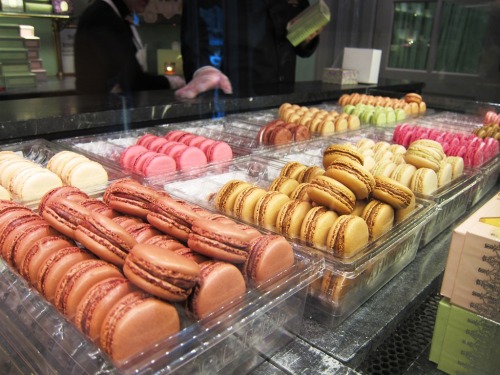 After the bouncer let us pass, we swarmed the macaron counter, which boasted over a dozen varieties, including our perennial favorites chocolate and salted caramel. As in Paris, the flavors are displayed on a little graphic menu, as displayed at the bottom of the post. There were other classic flavors including pistachio, coffee, lemon, raspberry and strawberry, as well as some more esoteric varieties including orange blossom, black forest and the quixotically-named Marie Antoinette (Earl Grey tea, though the macaron itself is blue). 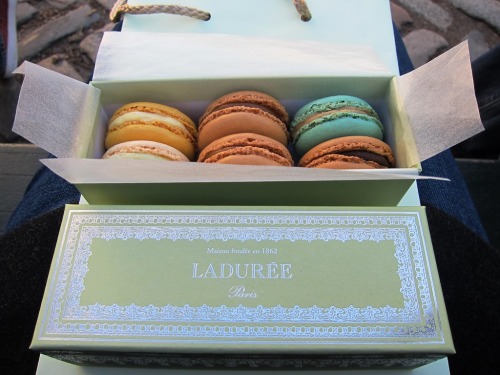 It was a steep $21 for six, but we felt it was worth every penny, as we indulged in our macarons on a bench in Central Park. The salted caramel and chocolate were also a big hit with our friends, and we are happy we brought over some new macaron addicts to the fold. Word on the streets is that there is now a Ladurée in Soho (398 W Broadway, New York, NY 10012) with a tea room. Maybe that will be our next macaron mission (if we can get past the bouncer).