Zac xtili! Reyna Mendoza had carefully explained to us how to say “Good morning” in the Oaxaca valley dialect of Zapotec only ten minutes before, but we were still having problems. Luckily Reyna, a native speaker of both Zapotec and Spanish, did all of the talking. On this day, our last in Oaxaca, we were lucky enough to be the only two participants in a cooking class with Reyna. A widely-known authority on the cuisine of this region, and a spectacular chef in her own right, Reyna has spent the past nine years hosting cooking classes that showcase what she terms El Sabor Zapoteco – “Zapotec Flavor.” A lifelong resident of Teotitlán del Valle, a small town outside Oaxaca City primarily known for its families of tepate weavers, Reyna takes her students through the sites and sounds of the local market – where valley Zapotec is spoken almost exclusively – as well as the careful preparation of some classic Oaxacan ingredients using traditional methods. In this context, “Zapotec” flavors does not necessarily connote pre-Hispanic dishes – the majesty of Oaxacan cuisine in general comes from its careful negotiation across Spanish and indigenous ingredients and techniques – but rather largely pre-Hispanic preparations. The jaw-dropping numbers of different molcajetes, earthenware comales, and stone metates in Reyna’s kitchen alone emphasize her insistence on using ancient preparation techniques to impart flavors one cannot get with other preparations. One then leaves her class with a quite different relationship to the food.

Class starts at the local market, which showcases meat and produce from the immediate valleys, as well as more exotic imports like apples (shipped in from Washington state). As is true throughout most of Mexico, it is considered very rude to take photos of locals, so we stuck to shots of food while using the three Zapotec words we learned.

No Oaxacan meal is complete without quesillo, a soft white cheese that can be crumbled on top of, or stuffed inside of, seemingly anything you want. Its mild flavor pairs well with many stronger ingredients. Packed hand-made fiber wheels and wrapped in string, this cheese has evolved over the centuries from when the Spanish first brought cheesemaking to the Americas. On this day, we would use a small wheel of it in preparing flores de calabaza rellenas de queso – squash blossoms stuffed with cheese.

Having picked up our ingredients at the market, Reyna brought us back to her absolutely spectacular kitchen. Half outdoors, bright and colorful, boasting a set of kitchenware to make anyone jealous, and to this day the only kitchen we’ve seen that incorporates two hammocks (for when you pass out after a big meal), it is our dream space. Swoon.

No cooking before chocolate! Oaxacans do love coffee, but historically, and to a large extent still, they begin their days with a cup of chocolate prepared in a green-glazed cup, and then frothed with a molonillo, a type of wood whisk that can be easily purchased in any Oaxacan market for between one and two dollars. Making the chocolate usually involves breaking pre-made bars into hot water or milk, and then frothing it with the molonillo. The chocolate bars used for our drink were made, by hand, by Reyna’s mother.

Some of the slew of ingredients for our day of cooking. Dried ground corn; coarse sugar and cinnamon sticks; dried red pasilla chiles; purple tomatillos; tuna fruits, the product of the nopal cactus; garlic; cilantro; small Oaxacan avocados (there are many different cultivars, each with their own flavors – the photo actually shows two different types); and a side view of a concha, a classic Mexican pastry always paired with morning chocolate.

Even more of our prep table: sea salt; the quesillo we purchased from the market; ground bread crumbs; a bundle of fresh squash blossms (widely used in Oaxacan cooking), and at the far right you can see a peak of epazote, a very distinctive green herb, and some guajillo chiles. 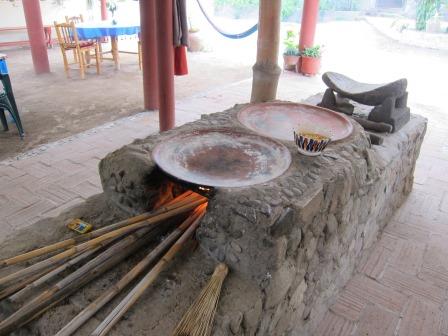 This area makes us jealous as well. Reyna’s kitchen features two large clay comales, a type of shallow cooking surface used in this region for centuries. Reyna’s are heated manually using a local type of bamboo. You can use the comales for any variety of uses: heating up tortillas, roasting dried chiles, or toasting dried corn. At right, a stone metate will eventually be used for grinding toasted dried corn. 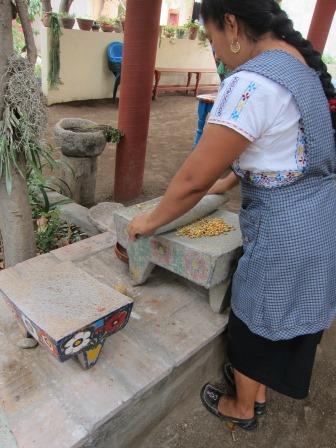 Reyna showing off her very impressive metate skills. Reyna’s kitchen had at least ten different metates, each one with a different use. While the one she is using in this photo is for corn, the smaller (and exuberantly decorated) one at left is used for preparing chiles that have been dried, smoked, and then soaked in water. Note how the corn one has a very rough surface, while the chile one is both smaller and smoother.

So, we made the executive decision not to show you, or describe to you, much more of the cooking preparation. On one hand, arriving at around 10am, we cooked for a few solid hours to make a four-course meal that left us completely stuffed. It would just be too much to show! But at the same time, we don’t want to share the recipes. While Reyna does give out small recipe booklets to everyone who takes her classes, you really should go to Oaxaca and experience it for yourself; indeed, some of the dishes simply cannot be made without the methods and materials Reyna uses. If nothing else, go for the table preparation: somehow while we were cooking, Reyna and her sister magically set up this lunch table for us. Already on the table are a roasted pasilla and guajillo salsa, and a very refreshing cold drink of tuna juice, the aforementioned cactus fruit that is a popular flavoring throughout the Oaxaca valley. We were also served some very fine, very smooth, and very strong mezcal, paired with orange slices and spicy salt.

Appetizer one: Flores de calabaza rellenas de queso – fresh squash blossoms stuffed with quesillo and fried. These are simple to make, but by no means easy.

Appetizer two: Ensalada de noplaes – a salad of tomatoes, jicama, nopales, and onions in a dressing made with avocados, limes, and cilantro, all topped with quesillo and served in a dried corn husk. Our favorite dish of the day. Simple to prepare, fabulous presentation, and bold, balanced flavors. 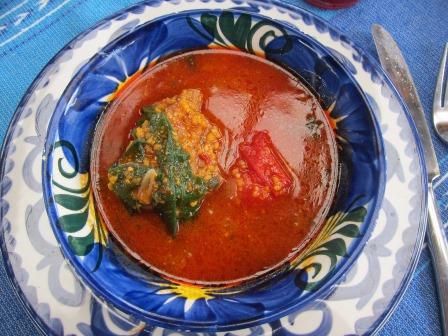 Main dish: Zegueza. Boiled chicken served in a sauce of specially-prepared corn (trust us, no way to make this at home), guajillo chiles, tomatoes, and onions, served with some leaves of hierba santa.

Dessert: Reyna’s favorite dish, nicuatole. In its simplest preparation (the white part in this photo), this dish only contains corn, water, sugar, and cinnamon. Yet making it is quite complex, involving a series of different processes and waiting that adds up to between four and twelve hours of prep time. One eventually arrives – very surprisingly – at a consistency like jello or pudding. Some then top the mixture with a sauce made from tuna fruits. Here, Reyna made a special sauce from sugar and cochineal, a small insect that lives in nopal cacti, and whose red dye is frequently used as a coloring ingredient. An astoundingly unique dish, and one that will be very difficult to re-create in Chicago.

Overall, this cooking class was an awesome experience. Even with all the time we spent cooking, Reyna had been preparing many of the ingredients for the dishes the day before. Indeed, our greatest experience from this class was the amount of concentrated effort and love labors put into this food: how the effort at grinding salsas by hand in a molcajete imparts a different (and better!) flavor than just putting them in a blender; how grinding corn in a metate that has been used for years creates a unique texture necessary for a any good zegueza. We highly encourage you to check out Reyna’s class the next time you are in Oaxaca; or, failing that, to check out her family’s restaurant: Tlamanalli. You won’t be disappointed!

3 responses to “Zapotec Cooking in Oaxaca with Reyna Mendoza”