Nom Wah doesn’t look like any other restaurant we have been to. Think the crazy ambiance of a 1950s diner meets corner pizza restaurant meets mah jongg parlor. The little street Nom Wah is on seems to be out of another era, and was given an especially surreal touch by a fashion-student photo shoot taking place with a model dressed in shiny spandex and vinyl while propped up against the shuttered entrance of a neighboring store. Only in NYC. We met our friends there for a Friday night dinner, and the joint was hopping. Nom Wah claims to be one of the first dim sum places in NYC, and it certainly has remained popular over the years.

You begin by marking your selections on a paper menu with a full range of dim sum options. Then the waiter fills you order, with plates coming out as they come out of the kitchen (which is pretty fast). There is no cart here, which means all of the food is made to order, and hasn’t been wallowing on wheels for the better part of the day. One other major plus is that there is something for vegetarians and meat lovers alike, but the menu itself is actually not as overwhelming as it is at some Dim Sum places, or at places with NO menu.

Here’s what we ordered for  people:

We were also excited to see a nice and reasonably priced tea selection. We got a Shou Mei White tea and a Jasmine green tea. We were not sure how much to order, but we need not have worried. The food was more than enough to feed 5 with ease, and more to spare. The scallion pancakes, bao and dumplings were standouts. There was so much good food… it is hard to believe that it only set is back about $10 apiece! Can you believe it? Who said there was nowhere cheap to eat in NYC? 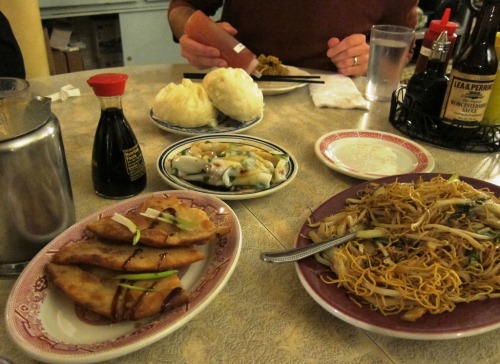