Mozambique in Lisbon: Cantinho do Aziz

If you’re looking for fantastic Portuguese food, Lisbon is the place. But Lisbon is also an excellent one-stop option if you are looking from food from other Portuguese-speaking countries. In previous visits to Lisbon we have sampled Cape Verdean, Angolan, and Goan (Indian) cuisine, but Cantinho do Aziz was our first experience with Mozambican food. We had heard nothing but good things about Cantinho do Aziz, so were excited to check it out. Be forewarned: the place is a little hard to find, located on a narrow street in the old, labyrinthine Mouraria district of Lisbon, up flights of stairs from the Martim Moniz Largo, a hotbed of Indian and African shops and culture. You have found your destination 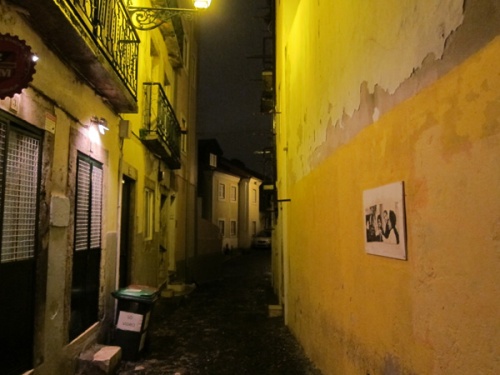 In the middle of winter, Cantinho do Aziz, seems to be a small restaurant. Tucked away in the building shown above, Aziz, the amiable and gregarious owner, would later assure us that during the warmer months hundreds of people dine here each evening, in the huge outdoor seating area that was currently closed, listening to Mozambican and Cape Verdean music while they enjoyed their meals. Indeed, if we ever come back we will surely eat outside; but even so, the Aziz’s menu had a ton of delicious-sounding options, many of which were totally new to us. Aziz was more than happy to guide us through the menu and tell us about the restaurant, which had been on the same site for decades. Aziz recommened the charmussas (€1) to start, a word related to the Indian samosa – a cognate that should already clue in diners to the fascinating history of cultural exchange in the Indian Ocean that infuses Mozambican cuisine. Indeed, we ordered two charmussas, one vegetarian and one beef, and in biting into his, M stated that it “tastes like the Indian Ocean.” Being a fire-breather, he was also a huge fan of the potent and flavorful habanero pepper sauce that accompanied the charmussas.

For entrees, we went with the Zambezi chicken (named for the river that flows to the Indian Ocean through central Mozambique) and the makoufe. The Zambezi chicken (€5) was similar to the roast chicken we had at the Angolan restaurant Moamba and featured a charred, flavorful skin. The makoufe (€9), voted the best dish in Lisbon by Time Out magazine in 2013, was the more complex option and definitely lived up to its billing. Reminding us of a Brazilian moqueca, makoufe stews generous portions of crab, shrimp and greens together with palm oil and coconut milk. Both dishes were delicious and heavily spiced (but not spicy). We were also impressed by the number of vegetarian dishes and appetizers on offer. The Cantinho drew a diverse crowd, and Aziz noted that it was even a popular lunch spot for workers from the American embassy. We can easily see why – we ate like kings for less than €20! 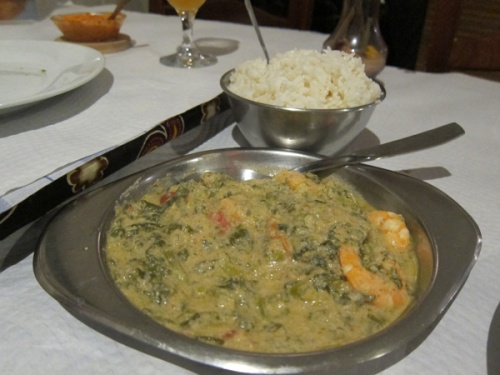 Though we were pretty full, we could not resist getting some dessert – cashew fruit mousse. We first encountered the cashew fruit (yep, where the nut comes from) in Brazil, and were perplexed by its sweet cross of citrus, papaya and nut flavors. It stood up pretty well in mousse, too!

Mozambican cuisine was definitely a unique combination of global influences we had never tasted before, and Cantinho do Aziz was the perfect place to try it. We were blown away by the tastiness, quality and low prices at Cantinho do Aziz. It is the perfect, friendly local option for fans of any cuisine. We hope to go back someday in nice weather to eat outside!