So we have something of a difficult relationship with Korean BBQ. In fact, we have had only had one good experience, all the way in Los Angeles. So, for a long time we never went out of our way to try Korean BBQ. However, when one of our friends suggested that we give Korean BBQ another try at Gogi (6240 N. California Ave, Chicago, IL) we relented, especially when we saw the stellar reviews. 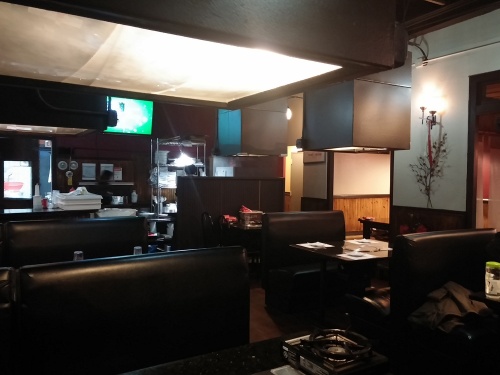 Gogi itself is a bit of a modern update of the Korean BBQ. However, the basic premise is the same – you order some meat, and it is grilled on burners on the table for you while you eat. One problem many Korean BBQs struggle with is ventilation, Gogi had a large fume hood over the table, but it still got a little smoky in there. The menu has other single person dishes, as well as alcoholic beverages and the Korean BBQ to share. We started off with the seafood pancake, which was huge – and everyone clambered for a bite.

For meat we ordered the short ribs, spicy pork and short steak. Each was billed as about 1 lb of meat, so we figured that one meat dish per couple was sufficient, and we were just about right. At our table there was both a tiny charcoal grill and a circular flat electric grill. Our waitress disappeared halfway through the dinner, so we are actually not sure if we followed the correct protocol at all by taking the meat from the flat grill and putting it on the charcoal grill…. Well no one got food poisoning or burnt, so I think we did alright. We really liked the spicy pork, and the short ribs were also a big hit.

The other star of the BBQ show are the banchan, or the huge assortment of tiny dishes that come out. There were so many here that they almost entirely filled up the 6-person table. We recognized some of the dishes like mushrooms, potato salad, seaweed, kimchi and ddokbokki, but the most perplexing of which was a water chestnut gelee! The other fun part of the experience is that you can order rice (for an extra charge), and at the ends of the meal, they will dump it onto the grill with the meat remnants and some other veggies, making for an impromptu fried rice. Tasty!

For desert we reverted back to childhood and got the fried ice cream. All having grown up in the Chicago suburbs, our first thought was that it reminded us of Chi-Chi’s where the only thing worth noting on the menu was the fried ice cream. Does ANYONE remember Chi-Chi’s? The fried ice cream was green tea, and put a little spin on it. After our meal, we were all completely stuffed, and for not too bad of a price, either. We had a great time at Gogi and it was the perfect place to try with friends – a little something for everyone to share. It turned around our attitude towards Korean BBQ and now we are looking forward to trying our next spot.