Zahav, a taste of modern Israel

When we are traveling, there is nothing we like more than checking out the top spots in all the towns we visit. We drove to New York this fall, and on the way we stopped in Philadelphia. And as we heard, the top place to go when in Philadelphia is Zahav (237 St James Pl, Philadelphia, PA). Zahav has gotten a lot of press recently for chef and co-owner Michael Solomonov’s innovative take on Israeli cuisine. It is notoriously hard  to get a reservation at Zahav, though if you are willing to eat at 5 pm (as we did at the last minute), you should have a little more luck. 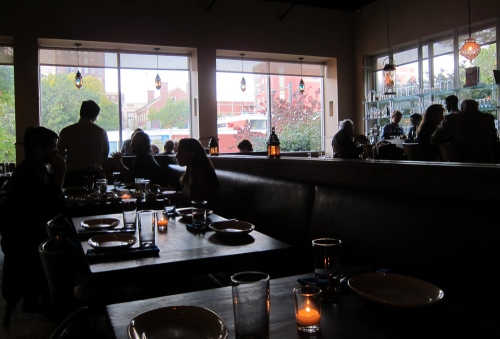 Many people order the Zahav tasting menu, “Tayim” which for $45 per person gets you hummus, an assortment of salads, two mezze, a grilled dish and dessert. We had alternative plans for dessert, so we ordered a la carte, starting off with an excellent mint lemonade and sour cherry iced tea. We knew we absolutely had to order the hummus, which garners rave reviews. The laffa bead it comes with is probably as much of a star. We opted for the traditional hummus, but there were other interesting varieties, including a butter-based Turkish hummus. While it was silky and creamy, we wish we would have tried one of the more unusual varieties. If you try any of these, let us know what you got and what you thought!

The rest of the menu included both vegetarian and meat-driven small mezze plates, as well as larger grilled meat plates to share. From the mezze portion of the menu we selected grilled halloumi cheese with walnut, date and apple, fried cauliflower, and raw lamb kibbe naya (for M!). The waitress recommended the halloumi, and we were happy she did: it was grilled to perfection (grill marks and all) and was complemented by the sweeter side. The cauliflower with a labneh yogurt mint sauce was a particular standout and a great addition to the trend of frying vegetables no one likes to make them better (e.g. Brussels sprouts).

From the grilled Al Ha’esh side of the menu, we got branzino (a recent favorite fish of ours) and lamb. Between courses, we even got a free taster with a black bean falafel with a squash puree (seen below) which was a great riff on the familiar Israeli falafel.  The lamb came out on skewers with a side of pickles and rice pilaf. The branzino was wonderfully tender with clean, fresh lemony flavors, which were accented by a tzatziki sauce. The service throughout was impeccable, very knowledgeable and struck a perfect balance between friendly and professional. We we mused over the pistachio cake, topped with honey mascarpone; and after telling our server how we regretted not planning for dessert, we even got a slice for free – and it was fabulous!  Everything we tried at Zahav was excellent – utilizing fresh ingredients to blend innovative and traditional Middle Eastern flavors. 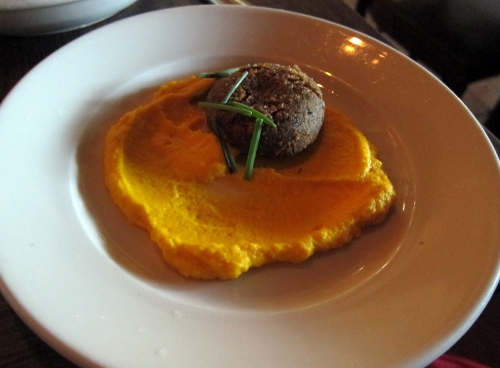 One response to “Zahav, a taste of modern Israel”