Let us let you in on a little secret – we know where they have the best pie in New York City: Petee’s Pie Company (61 Delancey St, New York, NY). Petee’s is a blink-and-you’ll-miss-it small shop on the Lower East Side, and we make it a point to visit it each time we are in NYC. M has gone far enough to say that this is his favorite pie ever. Knowing how much M loves pie (and how many pie places we have tried), this is a pretty bold claim. Petee’s is run by Petra “Petee” Paredez – who has pie-making in her blood – her parents own the Mom’s Apple Pie Company in Leesburg, Virginia. We are loving the proliferation of pie shops around the US and are so happy that the quality keeps going up as more people- even city dwellers – are becoming more discerning about pie. 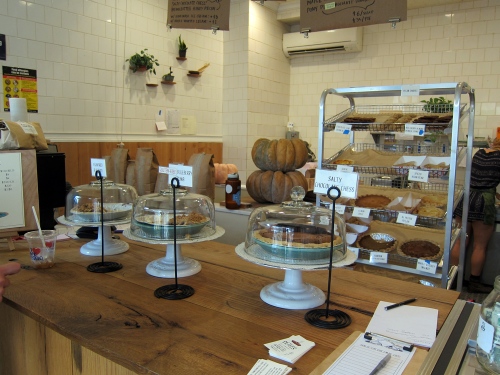 We have been to Petee’s several times, and every slice is better than the last ($5 for a slice, $30 for a whole pie). On our last few visits we have tried Rhubarb, Salty Chocolate Chess, Cherry Crumb, and Blueberry, each of these pies has been absolutely delicious. M has even become a rhubarb convert due to having one of the pies here. In particular we are fans of the flaky, tender crust that is neither soggy nor too crisp. We always look forward to visiting Petee’s because there is always something new, and the seasonal flavors are a must – the Cardamon Pear we had in October was scrumptious.

There are also savory, vegan and gluten-free pies (and even cheesecake) at Petee’s as well as an assortment of tea drinks. You can even get a frosty glass of cold milk along with your pie, which M considers to be a must with every pie experience. We are also particularly grateful to Petee’s for introducing us to the concept of the pie fork, a once-popular utensil that has one extra-large tine for cutting the pie and scraping the plate. We look forward to visiting Petee’s the next time we are in NYC, and you should go too – tell them we sent you!

Tagged as NYC, Pie, Southern US