When we went to Oaxaca in 2014, we were obsessed with all of the signature moles (7 distinct genres of mole are found in Oaxaca) available. Now, there are plenty of places to find dishes with Mexican moles in Chicago – and we have sampled quite a few – but none really wowed us. However, we heard a lot of buzz around the moles at Ixcateco Grill (3402 W. Montrose Ave., Chicago, IL 60625), helmed by Anselmo Ramirez, a chef that had previously worked in Rick Bayless’ Frontera Grill kitchen and is called a “Rembrandt of Mole.” After hearing that, we knew we had to try this place! Ixcateco is located on an unassuming corner in Albany Park, and is BYOB. The restaurant is relatively small, brightly colored, and with a casual and welcoming vibe.

The menu at Ixcateco Grill is small, with only 6 appetizers and entrees apiece, but features a well-curated selection of unique dishes from Southern Mexico. For appetizers there was a beet and jicama salad, a warm octopus salad as well as the only unsurprising choice on the entire menu – guacamole. We ordered albondigas a la mancha to start ($10) – beef meatballs served in mole mancha manteles (“tablecloth stainer” – made with tomatoes, pineapple and ancho chiles, among other ingredients). The bright, spicy-sweet red mole  was delicious, and the meatballs were garnished expertly with pineapple puree, chorizo and a pea shoot salad. Though we mainly ordered the dish for the mole sauce, which was exquisite, we were impressed by how well the unique components of the dish melded together.

For mains, there was carne asada in molcajete sauce, along with a catch of the day and shrimp in yellow pasilla chile sauce. However – we had our eyes on the prize – mole! L got chicken in mole negro oaxaqueno ($16), the famous most mole from Oaxaca, and undoubtedly the most complicated, with several kinds of chile pepper, chocolate, almonds, cinnamon, cloves and more. It takes nearly a day from start to finish to make and cook this mole, so it is a truly a labor of love. The dish came with half of a roast chicken coated in mole sauce, served over mashed potatoes (basically a vehicle for absorbing more mole). The mole negro was rich, fragrant and complex, everything mole negro should be. Hands down, this was the best mole we had had since Oaxaca. M got his favorite, the Yucatecan dish Cochinita Pibil ($16), pork shoulder with a spicy achiote rub, which was served with a nopal cactus salad. The pork was delicious, juicy and flavorful, though we both agreed that the mole was the star. Each dish was also served with homemade tortillas fresh off the griddle, made by chef Ramirez’ mother, Maria. 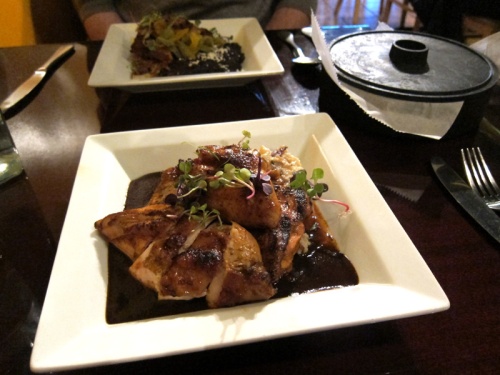 For dessert we had a tres leches cake, which was described by our server as “unmissable.” We are glad we sprung for dessert, the cake was fluffy, lightly sweet, and not at all soggy, one of our tres leches pet peeves. It is also worth noting that the service was excellent, knowledgeable and attentive throughout. We were very impressed with Ixcateco Grill and can see how it was named one of Chicago Magazine‘s best new restaurants of 2015. Ixcateco was one of the best Mexican meals we have had in Chicago, and the price won’t break the bank, either. If you are looking for upscale Mexican food with a modern twist, definitely give Ixcateco Grill a visit (they now even have brunch on Saturdays and Sundays), especially if you are in the mood for mole!