Around the World at Compass Rose in Washington DC

Sometimes it’s hard to know which type of cuisine to choose when deciding on a restaurant, especially when traveling in a city with as many great options as Washington DC. When we were in DC we found some great restaurants from various countries, but we also found a great one that covers a bit more ground: Compass Rose (1346 T Street NW, Washington, DC 20009) in Washington DC. Compass Rose is a globetrotting restaurant with a little bit of food from a bunch of various countries. According to Compass Rose, “So while it’s great to travel around the world, we understand that’s not always possible; instead of waiting for the smells and tastes on a great trip, we’ll bring them to you—in a cozy row home right in your own neighborhood.” Each dish at Compass Rose is listed alongside its country of origin, and the selections rotate frequently, and span the globe. Some examples off the menu when we visited include arepas from Venezuela, bhel puri chaat (kale, puffed rice, potato and tomato) from India, anticuchos from Peru and lamb kefta from Lebanon.

When we saw that they had one of our Brazilian favorites, shrimp moqueca, we knew we had to visit. It can get pretty crowded, and there are no reservations, we made a point to stop in early. The atmosphere at Compass Rose is pretty romantic: with low lights and wooden tables in a few connected rooms. There is also a special secret room in the back for people ordering the set menu (which is by reservation), when we visited it was a Bedouin Tent theme, with a selection of North African dishes. The international theme even goes to the cocktail and wine list, which spans less commonly-known wine regions like Lebanon and Hungary. 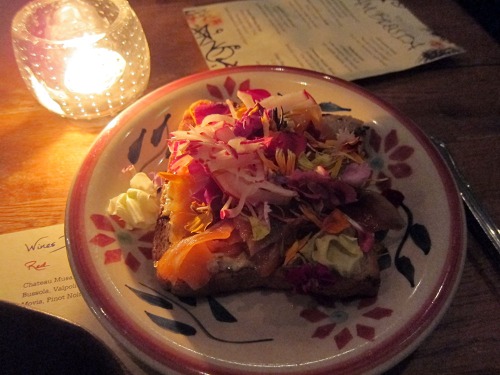 We could have picked any number of the eclectic dishes, but we eventually landed on:

Everything we sampled at Compass Rose was delicious, with fresh ingredients and clean flavors. If we went back, we would also order the Georgian flatbread – Khachapuri – with cheese, egg and butter. We saw a few being served at tables all around us, and it looked beyond delicious! Compass Rose is the perfect place to temporarily cure your wanderlust, we really liked everything we tried. Whether you are feeling like Spanish or Korean, Compass Rose will have something for everyone in your dining party.