This year, Lunar New Year falls on a Friday! If you will be celebrating Lunar New Year in Korea the festivities are called Seollal, and you can expect a crazy amount of food and festivities. We covered one of the most traditional Seollal dishes previously on ETW, tteokguk (rice cake soup). However, that only scratches the surface. Most large Korean meals come with an assortment of small dishes called Banchan, and the Seollal table is no exception. However, to the uninitiated, the array of banchan presented alongside a meal can be overwhelming. Fortunately, the internet is brimming with banchan guides: Lucky Peach, Crazy Korean Cooking,  Zen Kimchi, Thrillist and HuffPo, to name a few. Personally, my favorite banchan are japchae, radish kimchi and toasted seaweed. I love the concept that every meal comes with an additional portion of delicious, tiny dishes. Do you have a favorite banchan? 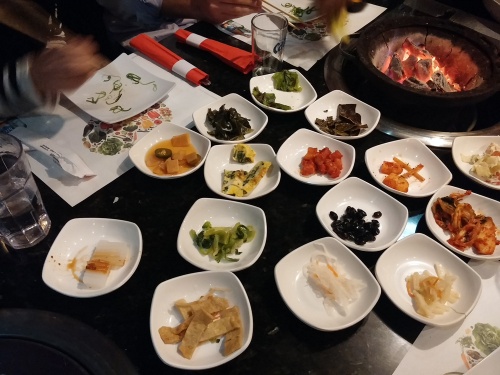 Banchan at Gogi in Chicago