One of the best things in Chicago is getting to enjoy the regional Mexican cuisine around every corner! Our favorite regional Mexican food is Oaxacan, so we are always on the lookout for new places featuring this region’s cuisine. Fortunately, in 2016, a new Oaxacan place opened quietly in Uptown, Kie-Gol-Lanee (5004 N Sheridan Rd, Chicago, IL 60640). Located near the Argyle red line stop, which is usually known for its Vietnamese pho options, Kie-Gol-Lanee has risen quickly to stand out as one of the premiere Oaxacan restaurants in Chicago. According to a Fooditor interview with the proprietors, the name of the restaurant is a phonetic spelling of Oaxacan village where they were born, Santa Maria Quiegolani, which is in turn a Spanish version of the Zapotec language words for “old stones” or “place by the river.”

We visited Oaxaca a few years ago, and our favorite thing there were the ubiquitous mole sauces, which come in 7 main varieties but have countless variations within each. Kie-Gol-Lanee heavily features its moles and other Oaxacan specialties on the menu. Though there are tacos and guacamole, more unique Oaxacan dishes make up much of the offerings. The appetizers start out strong: they even have the polarizing chapulines (fried grasshoppers – $8) as an appetizer. Personally, we love chapulines, and thought their rendition was great – they are a perfect salty, crunchy meal starter. Other unique appetizer included mushrooms in plantain leaves ($9). Salads with nopal (cactus) and beet sounded tempting ($9) as did the Oaxaca-style tamales (steamed in a plantain leaf instead of the more common corn husks – $5).

We were the most intrigued by the main courses, which included a variety of meats and seafood, many featuring moles. Highlights included gallinitas al horno ($20) Cornish game hen with black mole sauce and sesame seeds, and the camarones a la diabla ($20), shrimp with guajillo and chipotle pepper sauce.  We ordered the arrachera a la parilla ($21) – grilled skirt streak with grilled onions and jalapenos, topped with a huitlacoche mole, and the chicken enchiladas topped with red mole ($16).  The steak was cooked perfectly, and we were pleasantly surprised by the huitlacoche mole, which we had never tried before. Not a typical mole, this variety contained one of our favorite esoteric foods, huilacoche, a mushroom that grows on corn, which has a deep, earthy flavor and makes a delectable black sauce. The red mole on the enchiladas was incredibly rich and complex, elevating an otherwise simple dish. The moles here were the real deal, and you can tell that each was made from scratch from a huge variety of spices, vegetables and peppers. 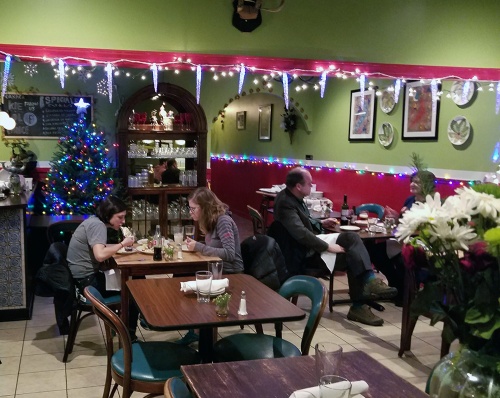 We also sampled some of the agua fresca drinks- the jamaica (hibiscus) and horchata ($3), though in retrospect we should have tried the more unique offering, chilacayote (made with squash). However, we did get our squash fix with dessert – candied chilacayote squash with cinnamon ($8). For those scrunching up their nose at the thought of candied squash for dessert, this tasted like a cross between sweet potato and melon and was really pleasant! We highly enjoyed Kie-Gol-Lanee and it transported us right back to Oaxaca. Though priced slightly higher than a typical Mexican restaurant in Chicago, Kie-Gol-Lanee is worth every penny. The service is friendly, and the authentic Oaxacan food is something that you cannot find at many other places in the city.