When we go to NYC, we always enjoy getting arepas – Venezuelan corn masa patties with a variety of fillings – but we didn’t really have a go-to arepa spot in Chicago (pupusas, yes, but not arepas). When we were back in town, my sister recommended we try BienMeSabe (1637 W Montrose Ave, Chicago, IL 60613) in Ravenswood, a new arepas spot that has been making waves in the Chicago food scene. Apparently, it is even becoming a go-to place for MLB players from Venezuela. The inside of BienMeSabe is clean and simple, and an attractive seating option is the large outdoor patio. BienMeSabe was so new, that when we visited, the mural they were putting up on the wall was not even finished being painted. Another key feature of BienMeSabe is that it is BYOB. When we got there on Sunday for lunch, many people were enjoying the BYOB option on the patio. 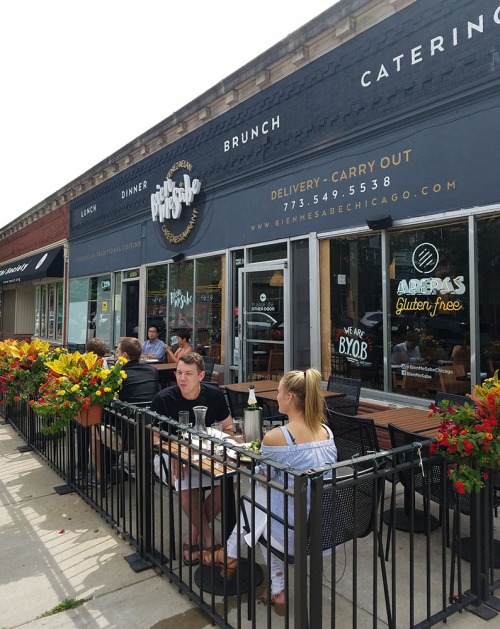 BienMeSabe’s menu mostly consists of arepas with a variety of veggie and meat toppings, each running between $8 and 10. We sampled the Reina Pepiada (Chicken Avocado Salad & Gouda Cheese), Caribbean (Caribbean Cheese, Plantain & Avocado), and the After Party (Roasted Pork, Gouda Cheese, Avocado slices). If you are not in the mood for arepas, there are also meat-heavy mains including grilled steak, fish, and the national dish of Venezuela, Pabellon Criollo. We began our meal with the shrimp tostones and the fried yuca. The shrimp tostones consisted of grilled shrimp on top of fried green plantains, and were particularly good, we really loved the spicy avocado-based Guasacaca salsa. We were also excited to see that we could get some classic Venezuelan drinks: chicha – a rice milk drink similar to Mexican horchata, and papelon con limon limeade.

The areaps are decently sized for the price, and they are not stingy with the fillings. The arepa toppings were good overall, but a little bit of a hit or miss. The roast pork on the After Party was flavorful and tender, and we think it was our favorite arepa of the day. Though the fried plantains on the Caribbean arepa were delicious, there was just too much of the somewhat flavorless shredded cheese. And for me to say there is too much cheese, there really has to have been a lot. Despite this, we really enjoyed the arepas overall and we are happy to have a Venezuelan place in the hood. We will definitely be back to BienMeSabe to sample some of the other arepa varieties and maybe a tres leches cake!

Barroco arepas and more in Cleveland

We are recently back from NYC, and had a hankering for some arepas. Fortunately, Cleveland has a self-proclaimed areperia, Barroco (12906 Madison Ave Lakewood, Ohio ). We visited Barroco on an unseasonably warm day, which meant we were able to enjoy the outdoor patio alongside our starchy treats. We were not disappointed, the simple but bright patio was a great place to enjoy some juice or a cerveza on a nice day. By the way, did we mention that Barroco is BYOB? However, even if you sit inside, you are in for a visual treat – the walls are covered with murals, twinkle lights, photographs and the accumulated scrawlings of other customers.

The menu is an interesting mix of Colombian and other South American influences, and there is something for everyone (even vegetarians). You can get a starter of shrimp ceviche ($11) or opt for the larger “picado” platter which is an assortment of pork, chorizo, yuca and ($40). For a traditional Colombian meal – you can get the national dish of sausage, rice and beans, Bandeja Paisa ($19). However, we were in the mood for the specialty of the house – arepas ($12 each) – of which there were both traditional and more avant-garde versions. For example, you can order a arepa with Bolognese sauce or buffalo chicken. We got two kinds of arepa in the more traditional vein: first the Reina Pepiada – Grilled chicken breast with avocado, red peppers and feta cheese; and next the Ropa Vieja – braised beef in tomato sauce with black beans, feta and mozzarella. 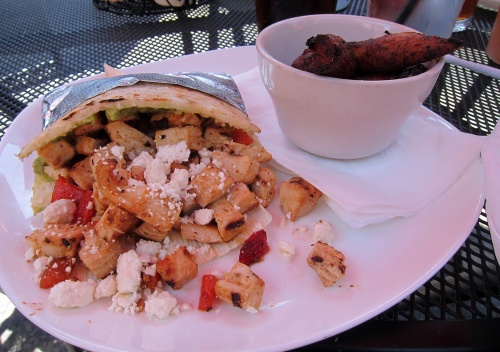 The arepas were freshly made from white corn into neat squares and generously filled (as you can see above). We appreciated that the masa was made in-house and you could really taste the difference. In terms of fillings, the ropa vieja was particularly delicious and comforting.  We also shared a side of guacamole with plantain chips, and each arepa came with a size of expertly fried sweet plantains (did someone say plantain?). Once spring rolls around again we hope to give Barroco’s outdoor patio a visit again soon. In the meantime, we will enjoy exploring the quirky interior while we get our arepa fix. 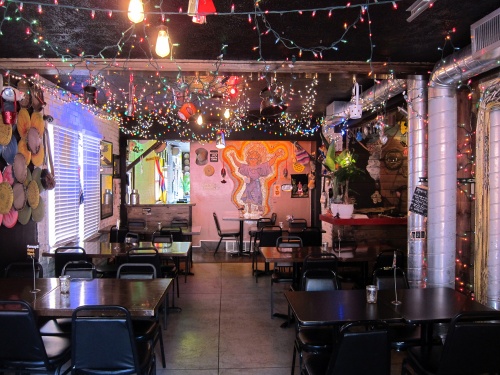 I found this infographic by Sorelys Liendo about Venezuelan arepas floating around on Pinterest (follow ETW if you haven’t already!) and I thought it was too good not to share. Check out all of the combinations – including the viuda (widow) – which has no filling. Arepas are one of the most popular foods in Venezuela and consist of a fried or grilled masa pocket filled with…pretty much whatever you want, as the graphic demonstrates. Adriana Lopez has a great history of the arepa for the curious, and here is a simple recipe. They really couldn’t be easier to make. 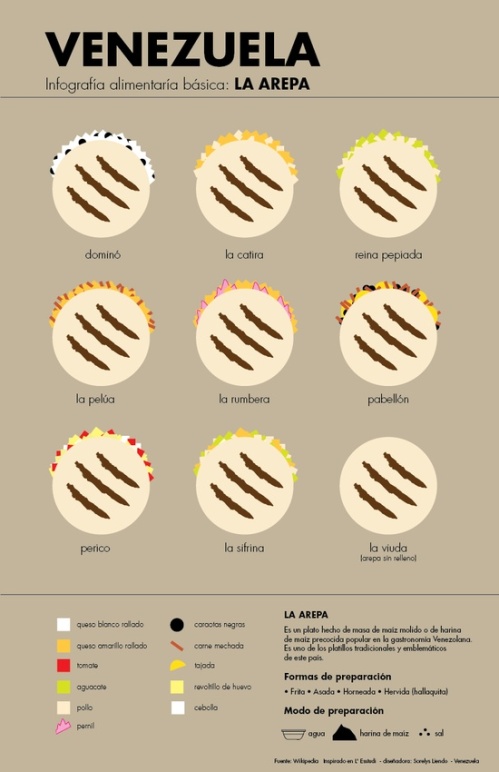 There is something about carbs with tasty fillings (especially cheese) that get us every time. Pretty much every culture has a national version of this combo – and Venezuela has arepas. In New York one of the hottest places for brunch makes some killer arepas.

On our last trip to NYC we headed to Caracas with a group of NYC-native friends for a Saturday morning brunch. Seems like we were not the only ones with the idea for some mid-morning arepas. There was a wait out the door – so we took ours to go and eat in nearby Tompkins Square Park.

I ordered the A10, the La Del Gato, which was filled with guayanés cheese, fried sweet plantains and avocado slices ($6.25), but they forgot it and gave me a chorizo arepa instead, a bit of a bummer. We didn’t find out til we were well into Tompkins park so I ended up trading for A-14, La Jardinera  ($6.25) vegetarian with our all too accommodating friend Ashley (Thanks Ashley!). Too bad for me though, since I hear the Del gato is amazing.

But in the end, I really enjoyed my trade-in. The Jardinera had grilled eggplants, sundried tomatoes, caramelized onions and guayanés cheese.   The arepa was near-faultless except for the fact that all of the cheese was concentrated at the bottom M ordered the A-20 La Sureña  ($7.50) grilled chicken and chorizo, with avocado slices and chimichurri sauce. M loved the chorizo arepa, which had a bit of a kick.

As we noshed in the park we also split an order of fried plaintains. In the end we did not miss eating in the cramped space and enjoyed the warm weather outside. Other than the mix – up on our order. Guess it gives me an excuse to go back and order the De La Gato someday.