Kerbisher and Malt, modern fish and chips in London

The neighborhood fish and chips shop, aka “the chippy,” is a British institution, so we figured out it was the proper place to kick off our London food tour (and start our recap, too). I had bookmarked many “best fish and chips in London” list, links and guides, however it was almost overwhelming deciding where to go. Everyone seemed to have a slightly different idea of what made the perfect chippy, and they ran the gamut from 1950s linoleum cafes to plush restaurants serving elevated British cuisine. One of the choices that bubbled to the top across lists was Kerbisher and Malt, which was a more modern, but still simple, rendition of a chippy. We were staying in Shepard’s Bush in West London, so it was a bonus that we were able to walk over to the restaurant (okay, maybe that was a big selling point, though Kerbisher and Malt offers several locations around town).

Kerbisher and Malt was simple and atmospheric, covered in white subway tiles and with modern wooden tables and iron chairs, with a slightly nautical vibe. The menu is simple, you choose from the selection of  fish and add on the side dishes including the classic mushy peas (£1.60) and chips (£1.90). There are also burgers, shrimp and fish sticks. The fish options available were Haddock, Cod, Coley, Plaice and Pollock, which ranged in price from £5.80 to £6.90. The fish was a la carte, but there was one combination deal, a small order of Coley with small fries and one sauce for £5. For the two of us, we ordered the aforementioned  small meal with curry sauce and Haddock £6.70 with fresh herbed tartar sauce (extra £0.50). Another important disclosure – this was M’s FIRST fish and chips experience, so the pressure was on to make it a good one. We pulled up a chair outside to wait in anticipation for our order. 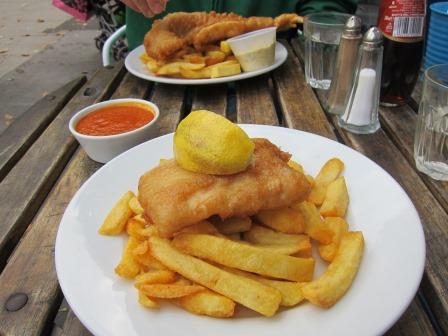 As we saw the server walking to our table, we were astounded by the size of the meals, the “small” meal was huge, and the regular size was gigantic. Though the prices may be a little higher than your corner chippy, you certainly get a lot for your money. The fish, in both cases, was tender and flaky, with tasty, crispy (not greasy) breading. The fries were fresh cut and came out piping hot and golden, though they could have been a bit crispier. The sauces were both homemade, and though vastly different, both complemented the fish. Who would have thought a red Tikka Masala-like sauce would have gone so well with fish and chips? However, I guess it makes sense, since they are both British! M highly enjoyed his first fish and chips experience, and vowed to follow up soon with another (or a classic Wisconsin fish fry). Happy and satiated, we felt confident to conquer the rest of the British food world after our auspicious start.