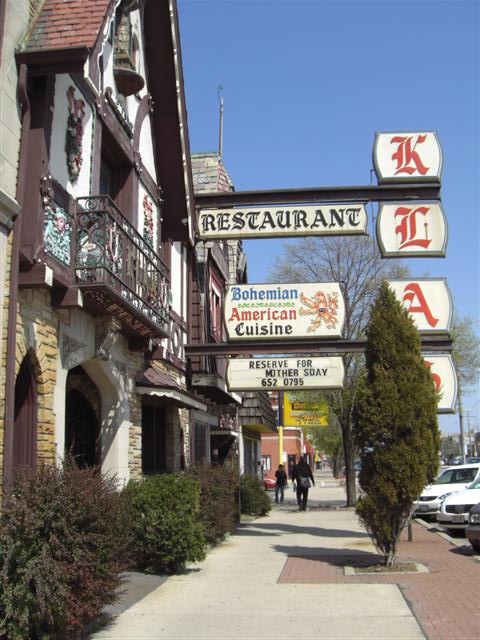 The decor gives you plenty of reason to enter Cicero’s most visible symbol of Czech heritage. Bathrooms that require you to enter through stone doors; a dining room accented with taxidermied birds, and candelabras reminiscent of a Bohemian castle. Unfortunately for the eaters, however, Klas’ wonderment started at the decorations and promptly ended with both the food and the service.

Maybe we should have seen it coming, but there was a clear defining line between regulars (read: older customers) and us (the only people under fifty). Our server, while seemingly quite polite with the other customers, demanded our orders within a minute of our seating, and did so in a manner that made us feel more like criminal suspects than hungry lunchers.

We let all this slide, because at the time the menu seemed quite tasty. When we entered around 1PM, seeking the lunch specials, my (M) eye went straight for the 1/4 stewed chicken in paprika cream sauce, with dumplings (pictured below). 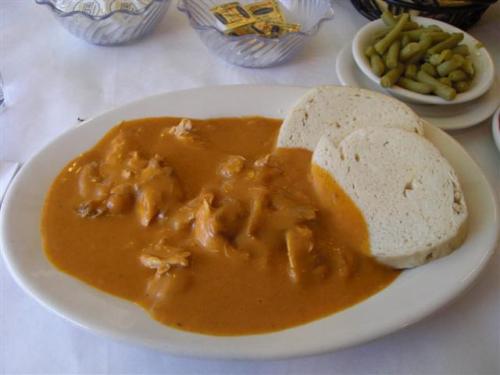 Sadly, the paprika and the chicken in this dish really didn’t come through. The sauce was quite bland, and the chicken – little of it that there was – was a tad too gristly for my liking. The dumplings were ok, not really much more than slices of bread, but really their only function was to soak up the disappointing paprika sauce. L didn’t fare much better. She ordered the Breaded Pork Tenderloin with dumplings (the menu gives an option between dumplings and potato salad, but our waiter didn’t give us a choice), about which she had a similar complaint to my dish – just too bland. Additionally, they ran out of breaded pork (the best thing on the plate), and gave her a piece of fatty roast pork in place of a 2nd piece. Everything tasted just alright, but didn’t have the excellent execution or flavor that one would expect from such a famous, stalwart restaurant. 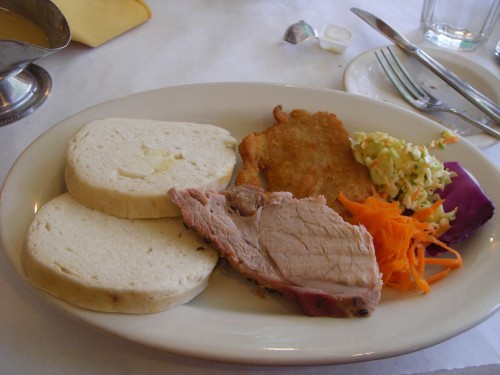 All in all, we were disappointed by Klas. We won’t go so far as to blame Czech cuisine in general, because we are sure there must be restaurants who handle the cuisine better than this. Maybe it just isn’t our cup of tea. Despite our impressions, Klas has been open since 1922, so it must be doing something right.