As the holiday season draws to a close, we are finishing up the last of the Christmas goodies – including one of our favorites torrone. It’s a pretty simple confection made of egg whites, honey, almonds and sugar. Popular across Southern Europe, this almond nougat is known as Turrón (Spanish), torró (Catalan), or torrone (Italian).The origin of Turron is Arabic, and was created by moors in the town of Jijona, in Valencia, Spain. Spanish turron comes in 2 basic varieties – soft Jijona or turrón blando, and hard Alicante or turrón duro, similar to peanut brittle. 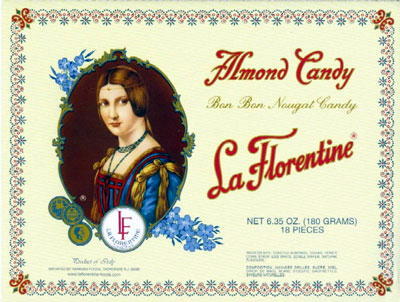 Torrone is most commonly consumed around the holidays – La Florentine is one of the most popular varieties in the US, and has individually-warpped portions of soft torrone in Vanilla, Lemon and Orange flavors. You can even get La Florentine torrone online, though it is pretty commonly available in larger grocery stores. Delicious Days even has a recipe to try on your own, even though it seems pretty tricky.

One response to “Finer Things Club: Torrone for the holidays”