A Taste of Sierra Leone at Sumah’s in Washington DC

We recently dove into Liberian food in Philly, and we were excited to find Sumah’s Sierra Leonean restaurant on our visit to a major hub of international cuisine – Washington DC. Sumah’s (1727 7th St NW, Washington 20001) is located just south of Howard University in DC, and is a simple mom and pop place with a bustling take-out counter, bright green walls and only a few tables. Sumah’s menu is fairly simple: you can either order a medium ($14) or large size of any dish with beef or chicken ($16)- you just choose the sauce. It also appeared that you could potentially choose the starch for your dishes: including jollof rice, fermented cassava fufu and gari – cassava mush – but there was only jollof rice on the day we were there. You can also get a small cup of sauce as a side order ($8) if you really can’t decide, and you can choose multiple sauces for medium or large platters for a surcharge. 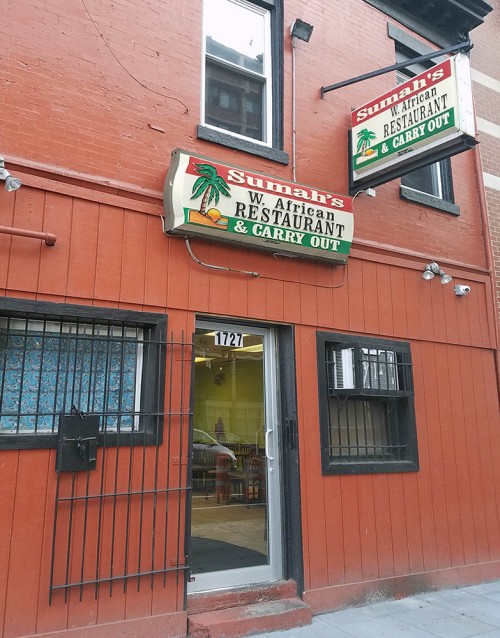 When we entered Sumah’s we were given a complimentary tasting plate of all of the sauces by the affable owner- some of which we had before and some that were totally new to us. It was a good thing he introduced us to all of the sauces or we would have never known what to pick from the simple descriptions alone. Here are the sauce selections:

We ordered a side of the spinach sauce, and a medium platter with a mix of tola and egusi sauce and chicken. The medium alone was more than enough for 2 people (or more), as you can see from the filled container on top. The stews were delicious and hearty, and definitely good for those of us who like palm oil. We also received a free order of fried plantains for dessert, which we gobbled up of course. We also recommend the super strong and delicious house-made ginger drink. We definitely recommend Sumah’s for a taste of the hard-to-find cuisine of Sierra Leone. The dishes at Sumah’s reminded us of Liberian food, but other than the jollof rice, it seemed pretty distinct from other West African countries like Ghana or Senegal. We’d definitely go back!