When we set out to New Orleans we were excited to stuff ourselves with as much Cajun and Creole food as possible (which we did), but we are always open to a good international meal, no matter where we are. Little did we know that we would get an authentic taste of Africa right in the middle of New Orleans, and actually gain a new country in the process – Gambia! Turns out New Orleans is home to a stalwart African restaurant with roots in both Gambia and Cameroon – Bennachin (1212 Royal St, New Orleans, LA 70116).

END_OF_DOCUMENT_TOKEN_TO_BE_REPLACED

The National Dish of Cameroon: Ndolé

Cameroon is playing its second match in the World Cup today so we thought we’d do a little research into the country’s cuisine, which is characterized by indigenous ingredients and a prevalent French influence. Ndolé is the national dish of Cameroon, it consists of ground nuts, ndolé leaves (aka bitter leaves – which give the dish their name) and either fish or beef. You can even add some shrimp, which seems appropriate since that is where the country got its name, from them Portuguese word for shrimp – Camerões! Sounds delicious! African Bites has a great recipe for Ndolé, and if you are unable to find Ndolé leaves you can use spinach or kale, as in this beautifully-illustrated Wandecrush recipe. 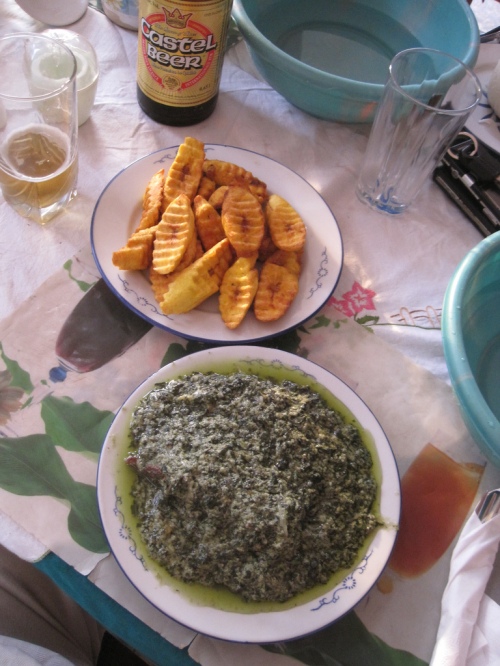 Ndole in Cameroon by Joel Abroad

We were foiled on our attempt to visit the Guinean restaurant on Howard, Le Conakry (The cook was on vacation), so we decided to hit up another African restaurant on Howard. We had been meaning to try Africa Harambee for a while, so it seemed like a natural choice. Walking by the restaurant, we peered into the windows, but the dining room appeared to be dark and abandoned. No one was in inside, despite a sign advertising that they were open. We pondered turning back for a moment, since a dead-empty restaurant a noon is a bad sign, but we figured we were there, so why not explore further.

Upon entering, the dining room itself had a slightly Nautical theme – one wonders what type of place was here before, coupled with  big screen TV blaring motocross races and a bar, it created a slightly incongruous ambiance. Appearance notwithstanding, the menu at Africa Harambee is Pan-African, with a special emphasis on Ethiopian food, as the owner is also connected to Ethiopian stalwart, Ethiopian Diamond. The choice of starches available with most entrees ran the gamut, too, with the availability of rice, Couscous, Injera, Chapathi (unleavened flatbread) or Ugali (cornmeal dough). We started off with a cup of Piquin pepper soup. The piquin comes from South Africa – also known as a Peppadew -and taste something like a slightly spicy red bell pepper. The flavor of the soup was good, if a little thin. 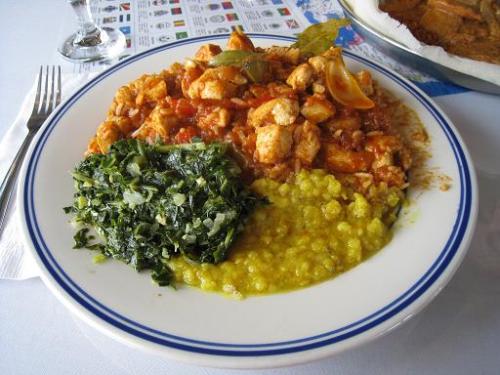 For a main course, M ordered the Jollof Rice – popular Senegalese dish that has spread throughout West Africa (the name Jollof comes from Wolof, the name of an African Empire). There are many regional variations, but AH’s Jollof rice had a green peppers, onion and tomato sauce seasoned with thyme, garlic and bay leaves (12.50). However, it was a bit mild for M’s taste. As sides, the alicha chickpeas and greens were good, but also a little bland. I ordered the Cameroon shrimp with Injera (13.50) which came in a slightly spicy peanut sauce. The sauce was delicious, but the shrimp came out whole, so it was a bit of a messy affair to de-shell the shrimps while covered in a thick sauce. However, the injera was a great help in sopping up the ensuing mess.

Throughout the entire lunch, we were the only patrons in the restaurant, which lent a slightly sad air to the meal. The owner and an old lady sat at a table in the corner watching us silently and intently as we ate. But I guess the service was especially attentive as a result. Despite our meal at AH being a little awkward, we were generally satisfied. While it was no Ethiopian Diamond we couldn’t help but wonder why was it empty on a Saturday at noon. Were we missing some fatal flaw? It can’t be location – the other half of the building, Hophaus – an American Bar and Grill, was totally packed. Poor Africa Harambee. Perhaps you can help them out…