A tale of two fritters: Akara and Acarajé

The transatlantic connection between Akara and Acarajé, bean fritters from Nigeria and Brazil respectively, is unmistakable. I wrote about this connection in 2014, noting the research of Nigerian food scholar Ozoz Sokoh at the time. I was really excited to see a short film on this topic by Sokoh, where she cooks both of these dishes. Seeing each being made really visually illustrates the unmistakable connection between these two Transatlantic dishes.

Jollof rice is one of the most famous dishes in West Africa, and famously, each country thinks their take on the dish is is the best. Jollof rice is made with garlic, ginger, onions and habanero / scotch bonnet peppers (you can customize the heat levels), and it often accompanies roasted meat or fish dishes, and sides like fried plantains. It is considered one of the national dishes of Nigeria, and it is to that country to which we turn today for our Jollof rice journey.

Yewande Komolafe is a NYC-based chef who was raised in Lagos, Nigeria. She previously shared her 10 Essential Nigerian recipes with the New York Times, one of which being Jollof rice. We have enjoyed Jollof rice many times in restaurants, but never tried to make it ourselves. However, after watching Yewande Komolafe’s video, we knew we had to take the plunge. Her Jollof rice recipe [here] was easy to follow, and we even had most of the necessary ingredients on hand already. One note: the recipe calls for parboiled rice, and if you are just using regular rice, you will want to add more liquid than the recipe calls for in order to properly cook the rice. The end result was delicious: hearty, spiced and spicy, thanks to the scotch bonnet. As she says in the video, this would make a great meal for a crowd alongside other hearty Nigerian recipes. We served our Jollof Rice with chicken thighs roasted in Obe Ata (which is the same taste profile as the Jollof Rice) and fried plantains.

Our ETW Armchair Travel destination today is: Nigeria! We have eaten our share of Nigerian food in the states, but we have never tasted one of the iconic foods of Lagos, Nigeria: Agege Bread! Brought to Nigeria by a Jamaican immigrant, and named after the Lagos suburb of Agege, Agege bread is now a completely ingrained and revered part of Nigerian food culture. This slightly-stretchy and chewy bread is made with few ingredients, and baked into a perfectly rectangular shape in special pans, and then fired in a clay oven. We really enjoyed this short documentary on the history of Agege bread, directed and produced by filmmaker Chika Okoli and featuring culinary historian and researcher Ozoz Sokoh aka Kitchen Butterfly [Instagram]. Ozoz does a great job describing Nigerian Food culture and the winding history of Agege bread. Making your own Agege bread seems to be somewhat difficult, but there are recipes out there, check out these options from K’s Cuisine, My Active Kitchen, and Africaparent. In the US, you can even get Agege bread baked fresh in Brooklyn.

Berber Street Food offers a tour of Africa and the diaspora

When we heard that there was a new African restaurant in NYC with a chef from Mauritania, our ears perked up. The restaurant is the brainchild of chef Diana Tandia, who is originally from Mauritania, but has worked in upscale restaurants around NYC for decades. She decided that it was time to strike out on her own, so she opened Berber Street Food (35 Carmine St, New York, NY 10014). The menu is a mosaic of different African and African Diaspora cuisines, along with some interesting fusions. 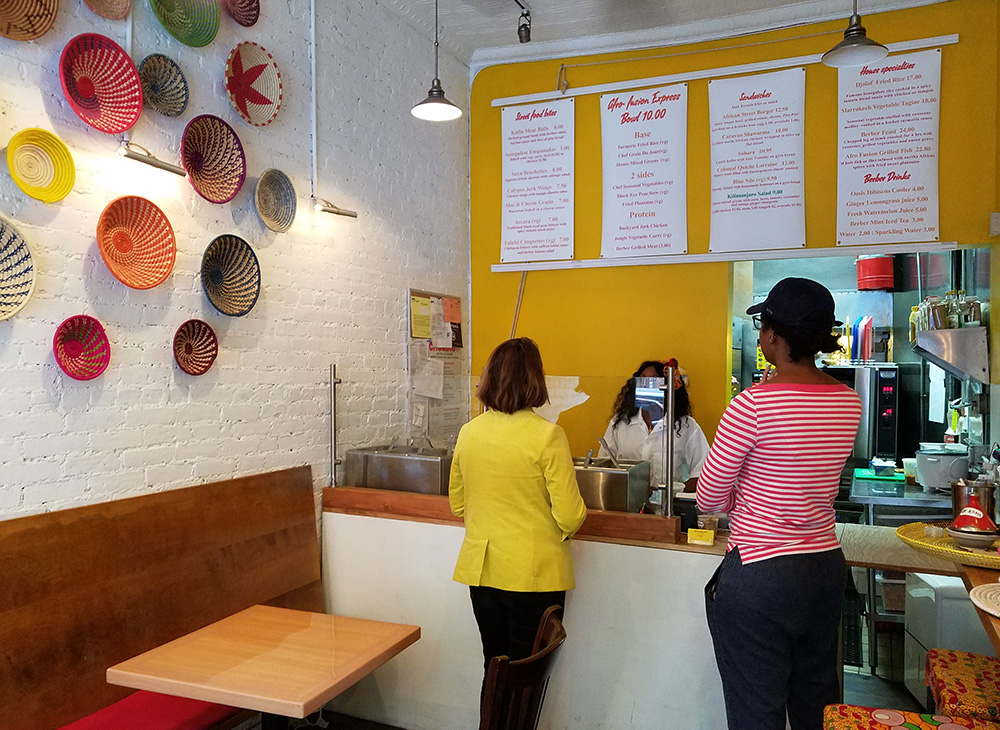 Berber Street food is a tiny – and we mean tiny – restaurants with 15 seats. This counter-service is not a place for groups, or to linger over a leisurely lunch (though when we were there, the couple occupying the table in the window was having a simultaneous birthday party and photo shoot, so who knows). When we entered around lunchtime, the place was packed, and we were happy to see that they were doing a brisk takeout trade.  Many of the lunch orders were buying Afro-Fusion express bowls ($10), which were various combinations of grains, greens and proteins, including tofu curry, Berber-spiced meat and Jamaican jerk chicken. 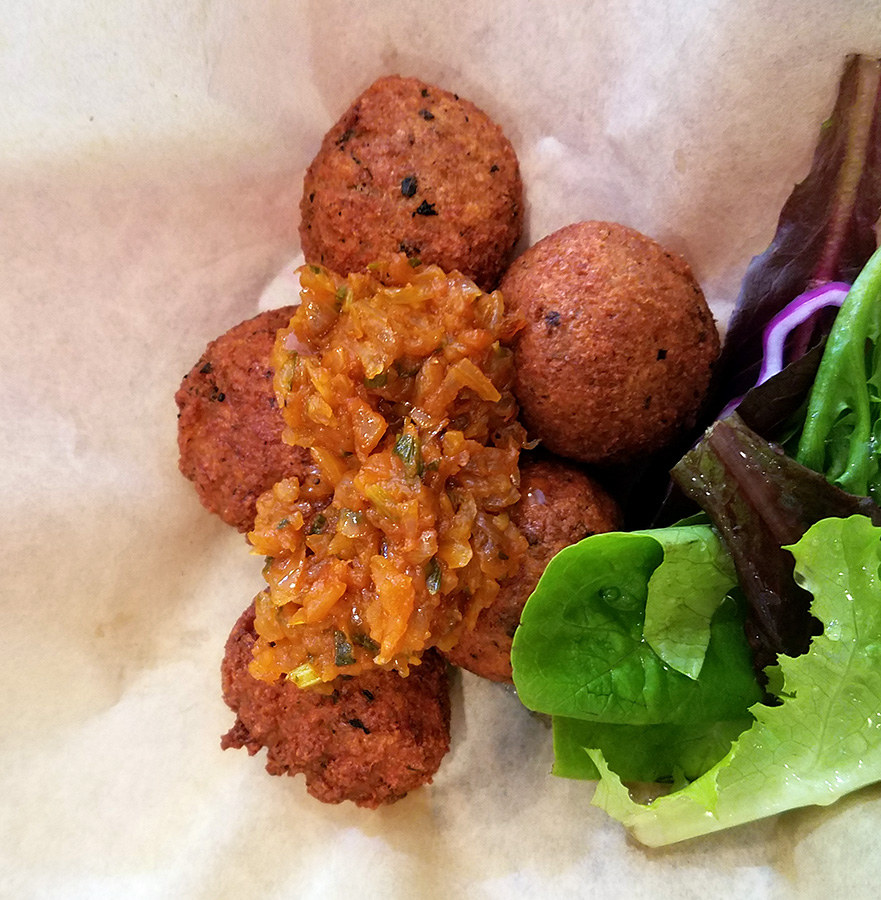 For starters, called “street food bites,” there are Senegalese empanadas (vegetable or beef curry $3 each), Kofta meatballs with Berber spices ($8), or a Suya Nigerian beef brochette ($8), along with Jamaican jerk chicken wings ($7.5o). All of Africa and the diaspora seemed to be covered.We were excited to see akara, a black-eyed pea fritter that is the Nigerian descendants of Brazilian acarajé with tomato and onion sauce ($7), so we knew we had to order it. Though smaller in size to acarajé, they tasted pretty similar and were delicious. M topped his with some spicy kani, west African hot sauce made of habanero peppers (which were also placed decoratively in basket at each table). 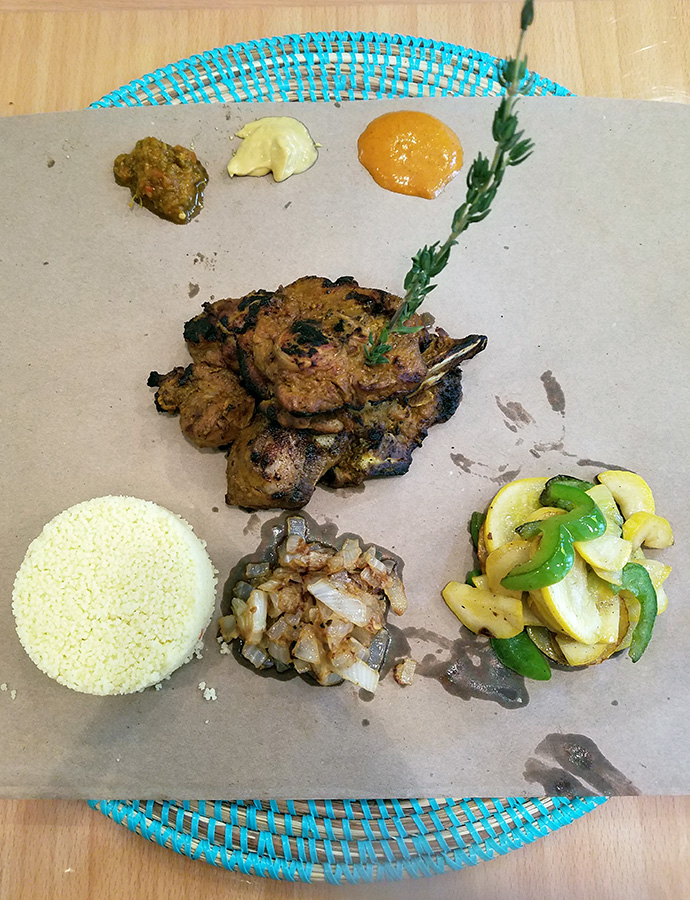 The mains were a little more pricey, and covered the greats hits of the region, including Djolof Fried Rice (which is claimed by many West African countries – $17) rice cooked in a spicy tomato sauce with either chicken or tempeh and Moroccan vegetable tajine, served served in an actual tajine ($18). We had the Berber Feast ($24) which consisted of roast lamb, squash and couscous, the most Mauritanian item on the menu. The lamb was fall of the bone tender and not gamey at all (sometimes a problem with lamb), and we enjoyed the accompaniments and sauces, though we felt the price was a little steep for the portions. We washed down our dinner with Berber iced mint tea ($3) and ginger lemongrass drink ($5) – we also discovered that these two mixed together made an amazing riff on the Arnold Palmer. 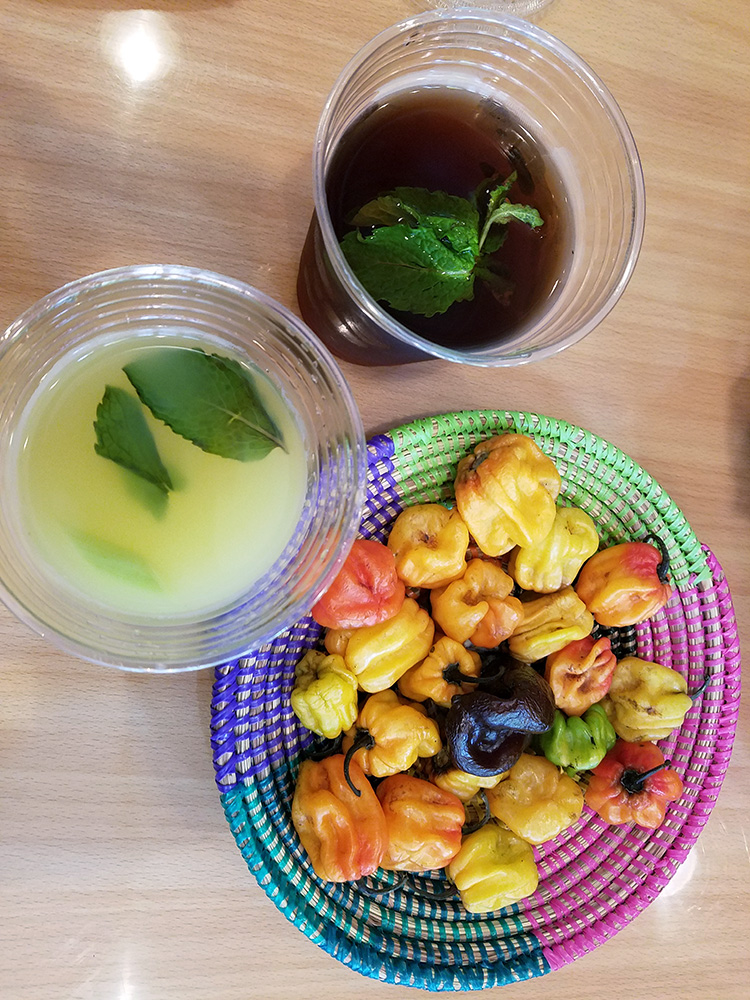 The attention to detail in Berber Street Food restaurant is amazing. It is basically a one-woman show, with Diana cooking, taking orders and delivering food (though it did appear she had a sous chef helping her back in the kitchen). We enjoyed talking with Diana, who connected with us over having spent some time in Brazil. If we lived in the area we could definitely see ourselves having lunch here pretty often. We wish Berber Street Food nothing but success!

The National Dish of Nigeria: Jollof Rice (or is it Egusi Soup?)

Nigeria is competing for the first time this year in the 2018 PyeongChang Winter Olympics, with a bobsled team composed of Nigerian-Americans. Though bobsledding may not get a lot of press in Nigeria, we wanted to highlight this country and its food. So what is the most representative Nigerian national dish? A poll conducted this year by Pulse Magazine had readers selecting Jollof rice, whereas a poll done previously by CNN had them selecting Egusi soup. Well, we are definitely not informed enough to weigh in, so we figured we’d highlight each of these national dish rivals. 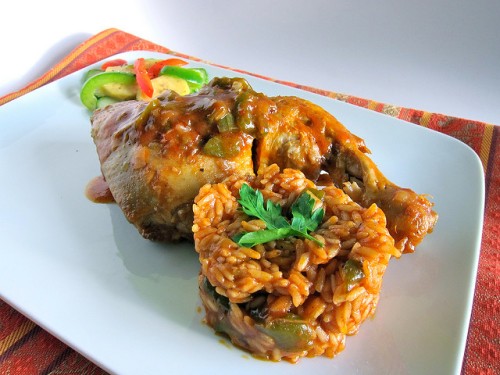 Jollof rice is a rice-based dish made with tomatoes, tomato paste, onions, hot peppers and spices, usually served with some kind of protein. Popular throughout West Africa, the recipe for Jollof Rice varies wildly depending on where you are. And of course, each country thinks that they have the best Jollof rice, and it has inspired years of heated debate (and even a rap song).  In Nigeria, the dish is also typically accompanies by fried plantains and moin moin, a spicy side made from black eyed peas. You can find recipes for Jollof rice from All Nigerian Recipes, Sisi Jemimah and Ev’s Eats. 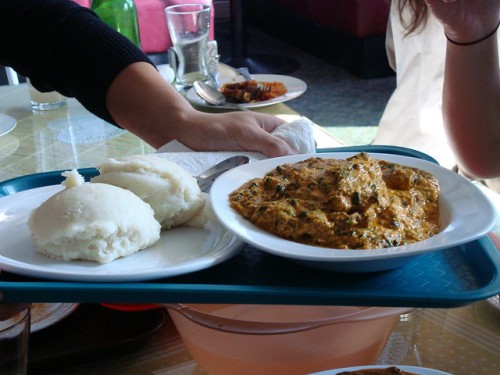 Goat Egusi with fufu by HC

Egusi soup doesn’t have as wide of a range in Africa, and is made from the ground seeds of Egusi melon, palm oil, dried fish, and leafy greens (in many cases bitterleaf). Unlike Jollof rice, Egusi may be a little harder to find, unless you live by a Nigerian market, but thank goodness for the internet. Egusi soup is usually served with fufu (boiled and pounded cassava) that helps sop up the soup. You can find recipes for Egusi soup at Demand Africa, All Nigerian Recipes, and All Nigerian Foods. Though we have tried both of these dishes, our hearts are with Jollof rice, one of our favorite West African dishes, yum! Of course, Nigerian cuisine is is full of delicious dishes, so don’t stop with just these two.

This post is particularly appropriate for the world cup since it connects host country Brazil with one of the countries playing a game today, Ghana. One of the most emblematic foods in Brazil, especially in the Northeast of the country, is acarajé, which we have written about extensively for this blog. However its roots are in Africa, and brought and adapted by enlaved Africans brought from West Africa to Brazil. Both Nigeria and Ghana have a dish called acara/akara, which is very similar to acarajé, and all variants are fritters made from black eyed peas. Betumi blog  and Kitchen Butterfly have recipes for akara, which definitely seem similar to acarajé. However, akara is typically eating for a snack or breakfast, while acarajé is more of a later-in-the-day snack. Another difference is that, in Nigeria, the akara fritters may be fried in vegetable oil, while in Brazil it is always the bright-red palm oil – our favorite!We love acarajé, so we assume we would be fond of its predecessors as well. 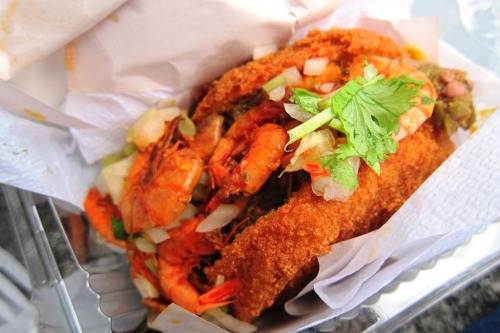 Bolat has been around for awhile, but the the slick redesign is much newer. The walls are a rich red and brown and there is an oversized mural on each wall, very different from the simple stark mom-and-pop restaurants that are the familiar faces of international food in Chicago. Located in Lakeview, Bolat features Nigerian, Kenyan and some popular-pan African dishes. Our waitress suggested that we each should order 2-3 dishes, but we think she  may have undersold the size of the dishes…. If we had followed her advice – I think we would have each had enough food for the week. For the three of us, we ordered 3 entrees and 2 appetizers.

We started out with Fried plantain with peanut sauce ($6) and Fried yuca with 3 sauces ($10). The fried plantain was amazing, and yuca tasted like a particularly starchy version of french fries. For our entrees we chose Peanut Soup over fufu with fish ($12), Yellow Goat Curry ($16 – with a little kick of heat) and Jolloff rice with goat ($18). Jolloff rice, made with onions and tomato, is a standard go-to order to gauge how good a west African restaurant is. The Jolloff rice we sampled at Bolat was excellent, and we were very pleased.

We also sampled an interesting dessert – a very strong hibiscus cordial – kind of like a beefed up Jamaica. There had been some complaints about the painfully slow service, but we found it to be perfectly pleasant, though it should also be noted that we were not in any sort of rush. Though it is a little pricey, Bolat is a good place to explore West African food in Chicago, and newbies will be tempted by the convenient location.